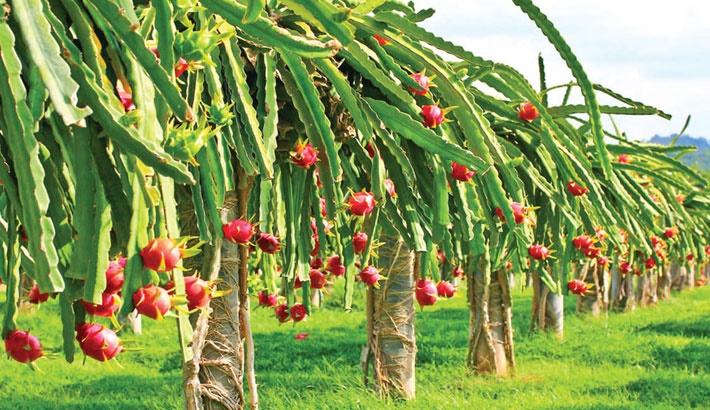 The farming prospect of dragon fruit, a delicious but non-native fruit in Bangladesh, is becoming brighter as farmers are growing the fruit in plenty thanks to the support from the Ministry of Agriculture.

This popular fruit has many health benefits, including its ability to aid in weight loss, improve digestion, lower cholesterol, strengthen the immune system, and boost energy levels.

Mehedi Masood, director of a project of Year-Round Fruit Production for Nutrition Improvement under Department of Agriculture Extension (DAE), told the Daily Sun that commercial success has attracted many new entrepreneurs to commercial dragon fruit farming.

“Due to favourable weather conditions, farmers are getting high yields,” he said, adding that now the foreign fruit is turning into a native a fruit.

Dragon fruit farming was introduced by some passionate orchard owners in Dhaka and later spread to other parts of the country due to its high demand and commercial value.

The number of commercial growers of the cash crop is gradually increasing as they are getting attractive prices for their produce.

Masood said, “If the dragon fruit cultivation trend continues in the country then we can export dragon fruit in five to seven years.”

He said the post-harvest loss of dragon fruit is lower than other fruits--- it can be stored for around 20 days in a normal environment and more than one month in the refrigerator.

Many entrepreneurs have set up commercial dragon fruit orchards in different areas of the dry regions and getting commercial success in a few years.

Farming of this fruit begun in the country in 2003-04 on a limited scale while farming started on a larger scale in 2007 and commercial cultivation began in 2014-15.

Dragon saplings grow with the support of pole and each pole three or four saplings can be planted. This plant needs less irrigation, requires a minimum annual rainfall of 50 cm and a temperature of 20 °C to 30 °C.

Golam Nabi, a dragon fruit grower in Natore, told the  Daily Sun that he has been producing dragon fruit on 25 bighas of land and now he has 4,000 poles of dragon fruits.

He started dragon farming five years back and now he yields 70-80 tonnes of dragon fruits from his orchard every year.

“April - November is the main harvesting seasons of dragon fruit,” he said, adding that he can sell it at Tk 300-400 per kg.

He grows red, white and pink dragon in his orchard and weight of each fruit ranges from 350 to 200 grams.