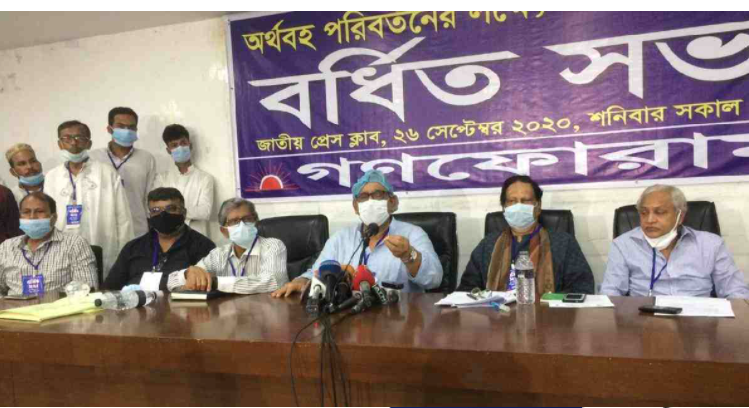 Gano Forum’s former general secretary Mostafa Mohsin Montu on Saturday said their party President Dr Kamal Hossain is suffering from a little bit of memory problem as he messes up many things these days.

Dr Kamal, however, said it is an ‘evil tactic’ of a group of leaders who are trying to create chaos in Gano Forum to mislead people.

Talking to reporters after an extended meeting of a faction of Gano Forum leaders at the Jatiya Press Club, Montu said they frequently talked to Kamal Hossain and met him for holding a meeting of the party's central committee and fixing a date for its national council.

“We also sent him a letter. We also met him a few days back and he assured us of holding a meeting. Later, he denied saying anything like that. What we think he may forget some things. I think he is suffering from a little memory problem. Besides, he messes up many things due to the influence of an evil quarter,” he said.

Montu, however, hoped that their party will remain united. “We hope good sense will prevail upon him (Kamal) to take steps so that those of us started the journey of Gonoforum 27 years back can work together.”

Earlier, a faction of Gano Forum leaders, led by Montu, Dr Abu Sayeed and Subrata Chowdhury, had an extended meeting of the party’s central committee where they decided to hold a national council on December 26 next. They also decided to expel party general secretary Dr Reza Kibria and three other leaders from the party.

Montu said they repeatedly tried to convince Dr Kamal to resolve the problems within the party and sit with the party leaders, but he only bought time and did not take any step in this regard. “He gave many dates, but unfortunately forgot those due to the invisible interference by some individuals. That’s why we decided to hold the meeting.”

Asked whether Dr Kamal is with them, he said, “We surely think he’s with us, and we urge him to abandon the controversial people.”

Replying to a question whether Dr Kamal will remain their president if he does not accept their meeting’s decision, Montu said it will be decided at the party’s council.

Contacted, Dr Kamal Hossain told journalists that the meeting in the name of Gonoforum is illegal as party president and convener is not aware of it.

“They’ve no organisational power and constitutional authority to hold a meeting in the name of Gano Forum. Our party has no relation with that meeting,” he said.

Dr Kamal said he is unwilling to talk about the decisions of the meeting since those are only opinions of some individuals.

As his attention was drawn to Montu’s remark that he now suffers from memory problems, the Gano Forum president said, “It’s their strategy to confuse people. I’m not interested in reacting to such a comment. In fact, I’ve no relation with them now.”

Replying to another question whether some party leaders are misguiding him to create troubles in the party, he said those who illegally held a meeting in Gano Forum’s name are the troublemakers.