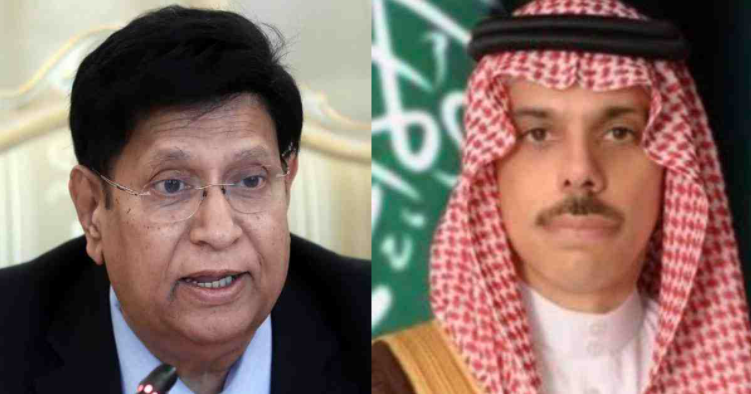 The telephone conversation is scheduled to begin at 5pm, an official told journalists on Saturday.

The Saudi government on Wednesday positively responded to workers’ issues ending barriers to their return to the workplaces in the Kingdom of Saudi Arabia (KSA).

The first batch of over 300 passengers left Dhaka on flight SV-802 of Saudi Airlines early Saturday.

The Saudi government recently raised the issue of 54,000 Rohingyas but it could not be confirmed whether the issue will be discussed or not during the telephone conversation.

Bangladesh is already overburdened with over 1.1 million Rohingyas living in Cox's Bazar district.

On Friday, Foreign Minister Dr Momen reiterated that the Kingdom of Saudi Arabia (KSA) will not send back 54,000 Rohingyas living there for decades.

"The Saudi government told us it’ll be helpful for them if we provide them with passports as Saudi Arabia doesn't keep stateless people," he said.

The Foreign Minister said they formed a three-member committee headed by Foreign Secretary Masud Bin Momen to look into the Saudi request.

There are many people to instigate because Bangladesh and Saudi Arabia maintain very good relations with 22 lakh workers in the KSA.

The Foreign Minister said many years ago - around 39 to 40 years, the then Saudi authorities took Rohingyas seeing their sufferings. They do not have any passport and they speak Arabic.

Bangladesh's position is to scrutinise their identity first as it does not want to take additional burden.

Dr Momen, however, said the Saudi government urged Bangladesh to take back 462 Rohingyas who are currently in Saudi jails for committing criminal activities.

Bangladesh Mission checked it and found only 70 to 80 having Bangladesh’s passports.

Dr Momen said Bangladesh will bring back those 70 to 80 people having Bangladesh’s passports by issuing travel documents. "We don't know about others."