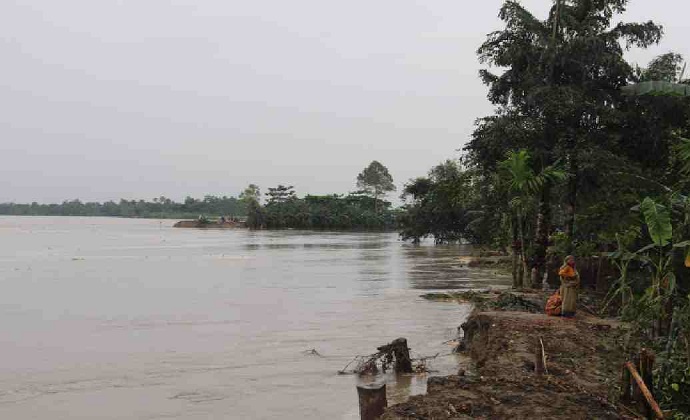 Flood situation in the low-lying areas of Kurigram and Lalmonirhat has deteriorated further as water of Dharla river is still flowing above the danger level due to heavy rainfall and onrush of upstream river water from the neighboring country.

Moreover, low-lying and char areas have been submerged in Nilphamari, ogra, Natore, Sherpur and Sunamganj district as major river crossed the danger mark.

Excessive rainfall in Northern, North-Eastern region of the country and adjacent Assam, Meghaloya, and Darjeeling areas of India has triggered the floods in the country.

owever, floodwater has started receding in the flood-hit Teesta shoal areas as Teesta river water is flowing below the danger level.

“The Brahmaputra-Jamuna River is in rising trend while The Ganges-Padma River is in steady state, according to FFWC.

More than 35,000 flood-affected people have been suffering immensely as over 100 villages and chars at 25 unions of nine upazilas in Kurigram and Lalmonirhat have been hit by the fourth phase of flood.

Many new river islands in the Sadar, Razarhat, Phulbari and Ulipur upazilas have been inundated during the recent flash flood, leaving thousands stranded.

Roads in the rural areas in some upazilas have also gone under water, snapping communication.