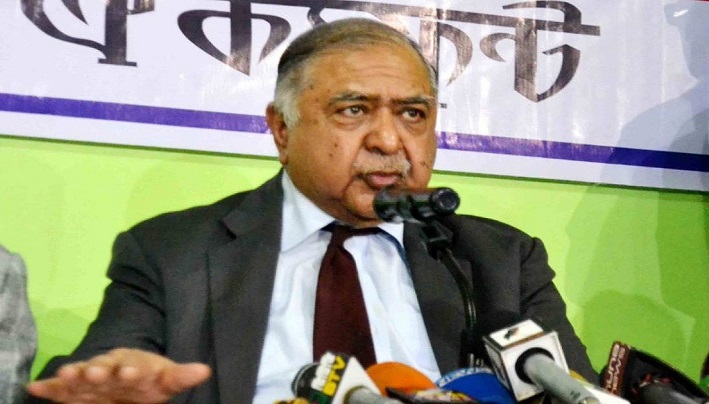 Amid the speculation of a possible split in Gano Forum, a faction of leaders of the party is going to hold an extended meeting of its central committee in the capital on Saturday.

The meeting is scheduled to begin at 10am at the Jatiya Press Club.

After the meeting, the leaders of the faction will arrange a press conference around 1pm.

However, party president Dr Kamal Hossain and general secretary Dr Reza Kibria have not been invited to join the meeting.

Talking to UNB, Subrata Chowdhury said they have been forced to take the step for holding the meeting without Dr Kamal and Reza Kibria as they did not get a positive response from them about it.

He said 71 leaders and their party’s central committee had a meeting on March 4 last from where they demanded holding an extended meeting and resolve the problems within the party.

They also sent a letter to Dr Kamal the same day.

In response, Subrata said Reza Kibria served show-cause notices on 13 central leaders and later expelled four of them from the party.

“Dr Kamal Hossain also dissolved the central committee unfairly as our constitution doesn’t give the President any power to do so. Many unconstitutional decisions were taken by the party general secretary. We sat many times with Dr Kamal to resolve the problems, but he did nothing except giving some promises.  We repeatedly urged him (Kamal) to hold the extended meeting, he only bought time, but didn’t take any step to do so," he said.

Under the circumstances, he said they are going to hold the meeting to work out the party’s future course of action. “We’ll let Dr Kamal know our decisions. We’re not going to split the party or remove Dr Kamal Hossain from the party. He is our leader and we want him to honour our decisions.”

Dr Reza Kibria said the meeting in the mane of Gano Forum is illegal as the party president and general secretary did not convene it. “It’s not Gano Forum’s meeting, rather a meeting of some party leaders who are violating the party discipline. We issued a statement a few days back disapproving the meeting. Our party has no involvement with it.”

He said a group of leaders have long been creating troubles  within the party. “We tried to resolve the problem with them but they’re not cooperating with us. I don’t know their motive behind arranging such a meeting amid the pandemic situation.”

Reza Kibria said Gano Forum will not face any split, but a few leaders are creating chaos in the party.  “We’re closely observing their activities, we’ll take organisational action as per the party constitution later against them.”

Conflicts within the party leaders began after its 5th council held on April 26 last year as many party leaders, including then general secretary Mostafa Mohsin Montu, were left out in the committee formed there.

Dr Reza Kibria was made party general secretary, but a group of leaders has not been cooperating with him from the very beginning. Initially, Abu Sayeed and Subrata were on the side of Reza Kibria, but later they engaged in conflicts with him over various decisions.

Party insiders said some Gano Forum leaders, including Montu, Subrata and Abu Sayeed, have strong reservation against Reza Kibria, but not against Dr Kamal

They, however, unhappy with Dr Kamal as he strongly supports Reza Kibria and endorses his decisions.

“The meeting is a way of putting pressure on Dr Kamal to remove Reza Kibria from the post of general secretary and hold a council to form a new committee incorporating all those are left out or ignored,” said a party senior leader wishing anonymity.

Another leader said Dr Kamal is apparently held hostage by Reza Kibria and some other party leaders who are misguiding him to take the party to a wrong direction. “We’re trying to keep the party united and keep it on track. We hope the existing problems will be resolved in the course of time.”