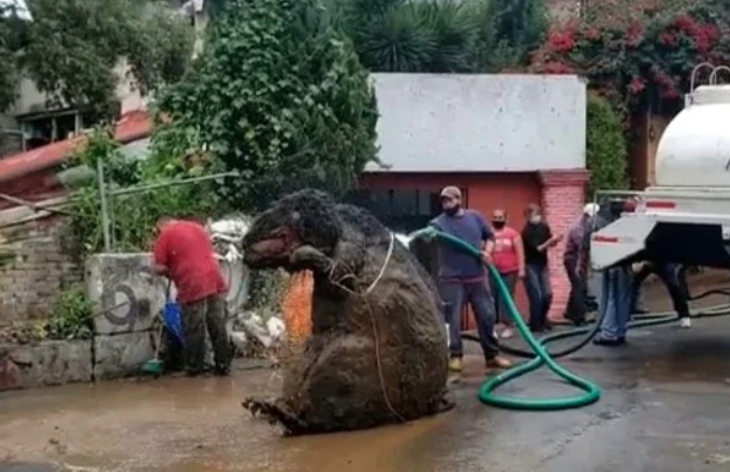 Mexico City cleanup crews lived everyone’s worst nightmare on Sept. 18 when they discovered what looked like a monster drowned rat while dredging the sewers. The Buick-size “rodent” was part of 22 tons of litter the workers had removed from the city’s drainage tunnels following heavy rains, according to the Border Report.

During the unsavory gig, the workers reportedly turned a corner and encountered what they described as a “giant rat,” which sat hunched over and sported incredibly realistic fur, reports the Daily Star.

As it turns out, the “vermin” was actually a Halloween prop that had been washed out of its warehouse by the storm. The decoration somehow ended up in the labyrinthine network of sewer tunnels, where it sat undiscovered for years — until now.

A woman named Evelin López has since come forward to claim the rat, which she reportedly created from scratch for Halloween. Lopez said it had gone missing “years ago” during a torrential downpour, and no one could help her retrieve it.

Fortunately, ratzilla appears to be in safe hands — as a now-viral video shows it being hosed off on the street by sewer workers after being rescued from its subterranean lair. Bystanders told Border Report that they marveled at the “beast’s” naturalistic appearance, with some claiming they would have run away in fear had they seen it on the street, reports the Mirror.

The rat’s rightful owner said she has no idea what to do with her “Princess Bride”-evoking prop. Social-media pundits suggest recycling the beast for this year’s Halloween festivities — provided they hose it off a few more times first.

Ratbergs aren’t the only unusual objects to surface in sewage systems. Last year, a bus-size fatberg was unearthed in a London sewer  and in 2010, an NYC urban legend manifested after an alligator crawled out of a sewer in Queens.