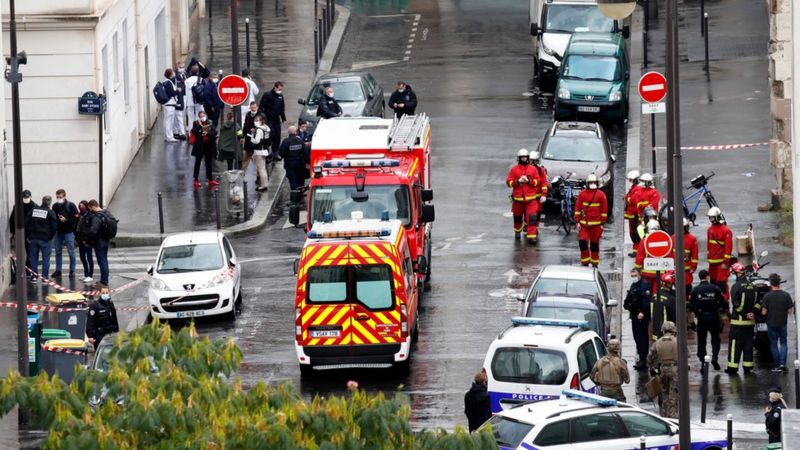 Two people have been seriously hurt in a knife attack in Paris near the former offices of the satirical magazine Charlie Hebdo, officials say.
A suspect has been detained in the nearby Bastille area. A second suspect has also been arrested, reports say.
Anti-terrorism police have taken over the investigation.
A security cordon has been set up in the 11th arrondissement in eastern Paris. The public were told to avoid the area.
A blade - described as a machete or a meat cleaver - was recovered at the scene of the attack near the Boulevard Richard Lenoir.
The arrested suspect was detained with blood on his clothing, French media reports say.
Initial reports said that four people had been wounded.
The attack comes as a high-profile trial is under way in Paris of 14 people accused of helping two jihadists carry out the 2015 attack on Charlie Hebdo, in which 12 people were killed.

The two people wounded were staff at a TV production company, one of their colleagues told AFP news agency.
"Two colleagues were smoking a cigarette outside the building, in the street. I heard shouting. I went to the window and saw one of my colleagues, covered in blood, being chased by a man with a machete in the street," another member of staff at the Premières Lignes production firm said.

The firm has offices in the Rue Nicolas Appert, a side street off Boulevard Richard Lenoir where the former Charlie Hebdo offices are located.
The satirical magazine has since moved to a secret location.