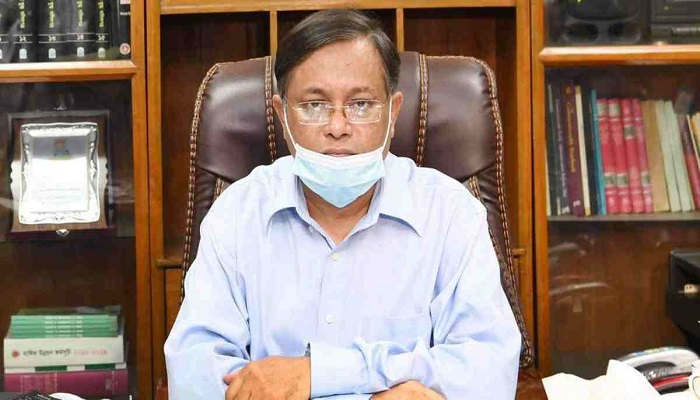 Their (BNP) intimacy with Pakistani intelligence ISI and their men is very old, he added.

This has been proved that the recent meeting in the Middle East between the Pakistani intelligence and BNP-Jamaat alliance is highly shameful, he added.

`You all know that Pakistani intelligence agency has given Tk 5 crore to BNP before the election in 1991’, he said.

This statement was corroborated by former top boss of Pakistani intelligence agency before the court, Hasan said. `So they are making conspiracies continuously to destabilize the country. Still three and a half years are left for the next general elections’ he added.

The Information Minister said these after speaking as chief guest at a seminar on `Mohammad Abdul Khaleq Engineer, Daily Azadi and Democracy’ held at Chattogram Circuit House as reporters questioned him about the recent secret meeting between the Pakistani intelligence agency ISI and the BNP-Jamaat in Jeddah, Saudi Arabia.

The Information Minister said, `In fact, when the world is stagnant by the corona virus, people are worried about their future, at that time, BNP is holding conspiratorial meetings at home and abroad without standing beside the people.’

Hasan said the BNP has now realized their failure to go ahead lied in sticking to conspiracies in the past. Otherwise, the people would not have put Bangladesh Awami League in power three times in a row, he added.

`So, I would request the BNP to stand beside the people by shunning the path of conspiracy,’ he added.

Speaking at the function Dr. Hasan Mahmud said that Prime Minister Sheikh Hasina nurtured the culture of appreciation for criticism. Bangabandhu’s daughter Sheikh Hasina and our party AL think that criticism sharpens the way of a man, he said adding that criticism helps refine the work. “That is why our government is working to uphold the freedom of press and development of newspapers”, he added.

“When we formed the government in 2009, the number of newspapers in Bangladesh was 450. Now the number of daily newspapers in Bangladesh is 1250. At that time, there were a few online newspapers. Now thousands of online newspapers have applied for registration. The journey of private television started in 1996 when Sheikh Hasina first took charge of the country as the prime minister. When we formed the government in 2009, there were ten private televisions. There are now 30 private televisions in broadcast, 45 took licensed for broadcasting. Apart from this, there are four government television channels. This exponential growth of the media has been possible only for Prime Minister Sheikh Hasina,“ he added.

Hasan said that such freedom enjoyed by the newspapers of Bangladesh is also not available in many developed countries.

The Information Minister said that ‘News of the World’, a 168-year-old newspaper in the UK, was once the world’s most widely circulated English daily.

“The newspaper was shut down after a lawsuit was filed against them for publishing false news. After the lawsuit, the court imposed a huge amount of fine on them. The company closed the newspaper because it could not able to pay the fine,” he added.

He said that the whole BBC team had to resign because of spreading false or untrue news against an MP.

“In the UK and Europe, newspapers and media outlets are often compelled to give fine for reporting inaccurate and untrue news. That has never happened in our country. The newspapers were not closed for all these reasons. That is why, the media in Bangladesh enjoys much more freedom than many developed countries in the world,” he added.

Citing the example of Singapore, the Information Minister said that only a few television channels are being run in Singapore, all are government controlled.

“Television channels in Thailand are government controlled. If there remains any content opposed to the government in Thailand, it is excluded. Such incident never happened in our country. We think that freedom of expression is the freedom of the media, it enriches the multidimensional social system in the country”, he added.

“That is why the daily Azadi must have the right to get thanks from the society and the state. I also convey thanks to the Dainik Azadi family for this,” he added.

Engineer Abdul Khaleq, who founded the newspaper with his prudence and foresight, has virtually brought the Azadi to its present stage, he added.

The Azadi family has been running the newspaper very successfully for a long time.

Hasan opined that the daily Azadi is the first newspaper in independent Bangladesh that has been transformed into an institution. Building a newspaper or an organization is not an easy task, he added.

The seminar was organized by the Swadhin Sangbadpothra Pathok Samity to mark the 58th death anniversary of Alhaj Muhammad Abdul Khalek Engineer.