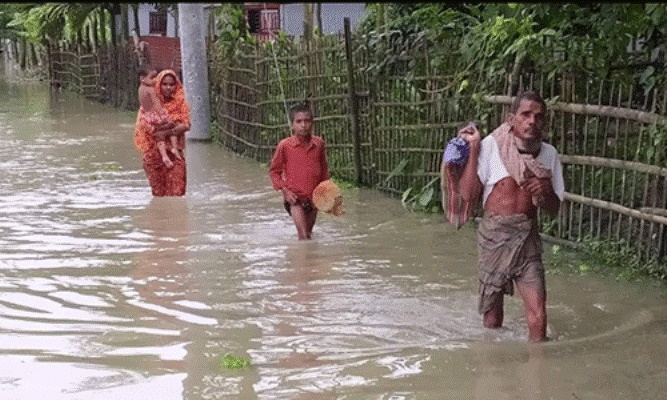 The flood situation deteriorated in Lalmonirhat and Kurigram districts marooning some 30,000 people in 100 chars, islands and villages of the river basins following continuous onrush of water from the upstream and heavy rainfall.

Low-lying and char areas have been submerged in Nilphamari, Lalmonirhat, Kurigram, Natore, Sherpur and Sunamganj districts as major river crossed the danger mark due to onrush of upstream water.

The water level in major rivers is swelling again, which is slowly creating a flood-like situation by inundating low-lying areas in the Northern and North-Eastern region, WDB said.

In Kurigram, more than 500 families have been homeless as flood situation worsened again due to swelling of the major Rivers including Dharla and Teesta.

Besides, floodwater inundated many houses and damaged Aman paddy and vegetables in the district.

Some 50 establishments including a primary school building have been devoured by the river in the last two days.