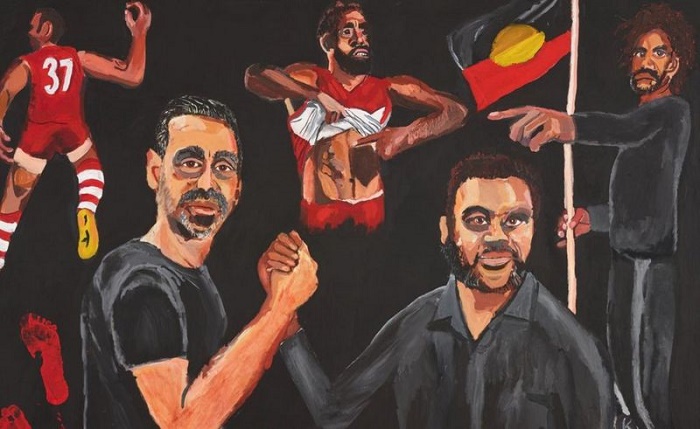 Australia's most prestigious award for portraiture has been won by an Aboriginal artist for the first time in its 99-year history.

Vincent Namatjira, 37, claimed the annual Archibald Prize for a painting of himself and Adam Goodes, a champion Aboriginal Australian Rules footballer.

Namatjira is the great-grandson of celebrated artist Albert Namatjira.

Previous Archibald winners include some of Australia's most acclaimed artists, including Brett Whiteley, John Olsen, Wendy Sharpe and Ben Quilty.

"To be the first Aboriginal artist to win is really special," Namatjira said after the announcement.

"I feel like this is a very important moment in Australian art."

His entry, titled Stand Strong For Who You Are, was chosen by the Art Gallery of New South Wales' board of trustees from a record 1,068 submissions.

"Vincent's work shows how much portrait painting still has to say and what strong voices our Indigenous artists have," said gallery director Michael Brand on Friday.

His co-subject Goodes, a former Australian of the Year, took an early retirement from Australian Rules football in 2015 following persistent racial abuse from fans during games.

Namatjira said Goodes had taken "a strong stand against racism" both on and off the sporting field.

Wyatt, an artist and actor, won the Packing Room Prize - which is selected by gallery staff - for a self-portrait.