Shanto eying to cement his spot in nat’l team 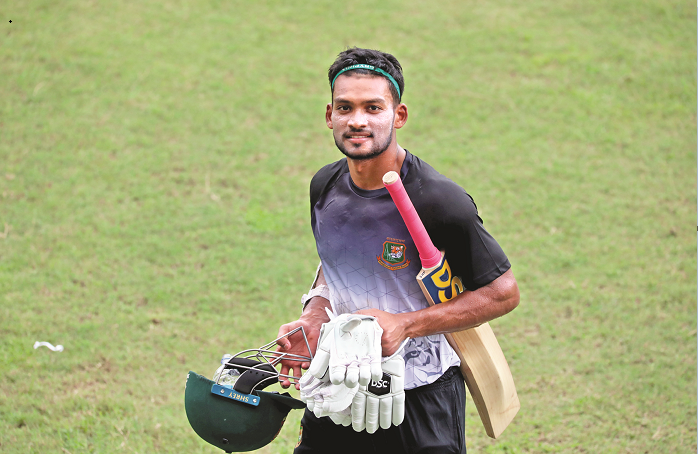 Openers Tamim Iqbal and Sadman Islam faced Taskin Ahmed and Hasan Mahmud, who were bowling with the new ball while in the other net middle-order batsmen Mohammad Mithun and Yasir Ali batted against a semi-new ball delivered by Al Amin Hossain, Rubel Hossain and Mustafizur Rahman.

The new ball is expected to be shared by Ebadat Hossain and Abu Jayed but the duo was unavailable as the former is in isolation while the latter was tested corona positive.

After the pacers completed nearly five overs apiece, spinners came into action with Mehedi Hasan and Taijul Islam bowled against middle-order batsmen while Nayeem Hasan and Mahmudullah bowled against the openers.

The introduction of wicket-keeper and slips along with different all the noise made by fielders at different fielding positions only showcased that it was not a typical net session while team management wants to give them match scenario practice.

Nurul Hasan and Liton Kumar Das donned the keeping gloves and it won’t be surprising to see Nurul back in the Test fold soon considering his inclusion was nothing less than a surprise.

Mushfiqur Rahim and Mahmudullah replaced the middle-order while Mominul Haque and Najmul Hossain Shanto came in place of the openers after the first-batch of batsmen completed their stipulated time in the middle.

Najmul later said that he had some hard time during the COVID-19 pandemic as everything was closed and now looking forward to cementing his place with some big innings.

“I played some good innings earlier but all the ways I want to play big innings and looking forward to doing that. In the lockdown all I wanted to do was to find out my fault and tried to work on it,” he said.

“If I get the chance in the future; I will try to use this experience,” he said.

However, the left-handed opener did not hesitate to say that they are feeling the toll of bio-bubble life.

Cricketers entered the bio-bubble health safety net from January 20 ahead of their Sri Lanka tour for the proposed three-match Test series.

The players, coaching staff and officials check-in at Pan Pacific Sonargaon Hotel in the capital for the residential camp that started from Sunday.

BCB already booked two floors of the hotel to accommodate the cricketers and the supporting staff for the tour while the board officials insisted that the hotel staff who are expected to work with the team will be living in a separate dormitory.

BCB officials also confirmed that they have tested the drivers who are expected to drive the cricketers’ team bus from the hotel to the ground.

“It is not easy to remain locked all the time and no one likes to be in quarantine but we are trying to adapt to it and learning how to enjoy with it,” said Najmul.

The series against Sri Lanka is highly unlikely as per the schedule and it is believed that this uncertainty is creeping into their mind.