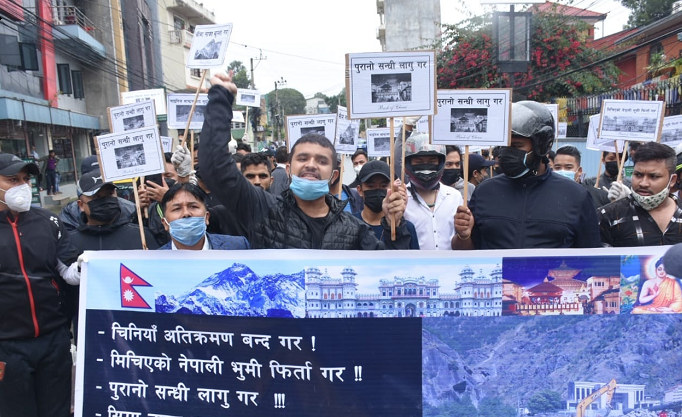 A group of people staged a demonstrated in front of the Chinese embassy in the Nepali capital Kathmandu on Wednesday afternoon against recent land encroachment by China.

Chief District Officer Chiranjibi Giri had toured the area earlier on Wednesday where he was sent back by Chinese forces claiming that it was their land and building was constructed on their land.

Soon after discovery of illegal construction of infrastructure in Nepali land by the Chinese side, it has been reported that pillar no. 11 in the area is now not traceable.

The Chinese side has built buildings at a distance of around two kilometres from border in Lapcha Limi area of the Humla District. China in recent years has been carrying out construction works near the border with Nepal for several years.

While the Government of Nepal has remained mum over the issue, the Chinese Mission in Nepal has issued a release claiming the building is built in their side and asked Nepali authorities to verify the border points.

"The buildings mentioned in the media have been verified to be on the Chinese side of the China-Nepal border. The Nepali side may make verification again," Chinese Embassy spokesperson said on Wednesday.