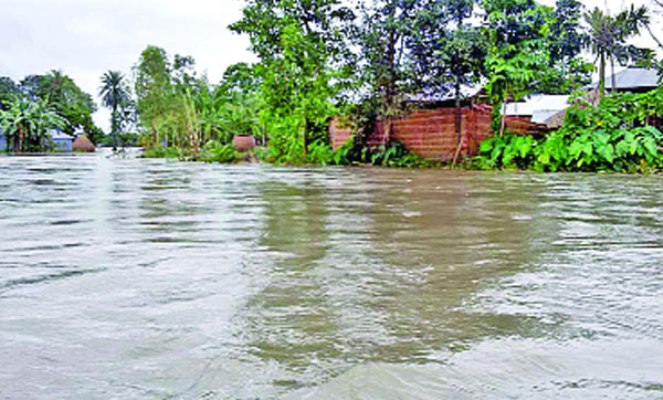 Several hundreds of thousands of people have been left marooned in chars and river basins in Lalmonirhat and Kurigram districts as the waters of Teesta and Dharla rivers crossed the danger level due to incessant rains and an onrush of water from upstream India.

The water level of Dharla River in Kurigram is also rising and flowing 5 cm above the danger level at Dharla Bridge point since 6am, BWDB said.

In Lalmonirhat, some 5,000 people have been marooned as the low-lying areas were inundated due to the incessant rainfall for the last two days until Thursday morning and onrush of hill water.

Abdul Quader, sub-divisional engineer of Lalmonirhat Water Development Board, said the Teesta River was flowing 20 centimeter above its danger level near Teesta Barrage point in Hatibandha upazila of the district.

Rabiul Islam, executive engineer of Dalia Water Development Board, said, the Teesta River was flowing 12 centimeter above its red mark at Dalia point till 6 pm on Wednesday and it was flowing 27 centimeters above its danger level on Thursday morning.

Already 44 sluice gates have been opened to tackle the flood situation, he said.

They were also asked to make a list of people affected by the recent flood, he said.

In Kurigram, flood situation worsened again due to swelling of the major Rivers including Dharla and Teesta rivers.

The Dharla River was flowing 19 centimeter above its danger level in the morning.

Besides, floodwater inundated many houses and damaged Aman paddy and vegetables in the district.

Some 50 establishments including a primary school building have been devoured by the river in the last two days.