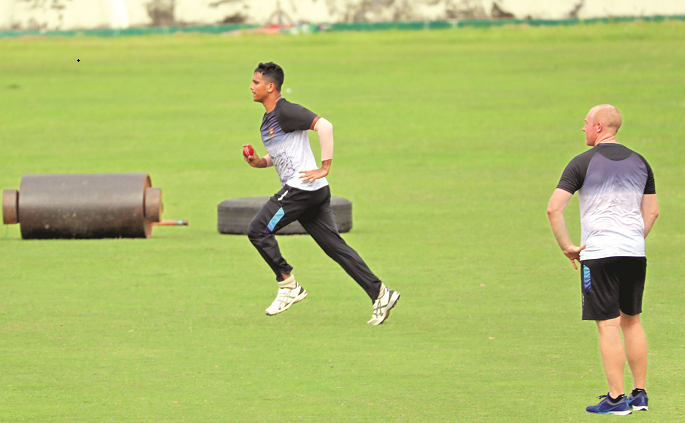 The inclusion of Saifuddin in the 27-member preliminary squad ahead of the upcoming three-match Test series is a major indication that team management is looking for a bowling all-rounder as a third seamer option.

Since the departure of Mashrafe Mortaza, no one could grab that position in the longer format and Saifuddin has all the traits to be a successful replacement of Mashrafe.

The boy from Feni is excited with the prospect adding that now he is looking forward to make the most out of the opportunity.

“Every player has the dream to play Test cricket and I am not the exceptional and I will try to achieve something good,” Saifuddin said on Wednesday.

“I am focusing to develop my skill and get myself fit because I am a bit worried about my skills. Last six or seven months, I could not bat and bowl,” he said.

“I did not get to practice much but if I am sent to Sri Lanka, I will try to do my best,” he said adding that he went through some tough time during his injury.

Saifuddin said that he is excited to return back to Sher-e-Bangla National Cricket Stadium adding that he is thrilled to be called in the Test squad.

“Alhamdulillah after seven-eight months I am playing with the team at Mirpur and I am very happy,” said Saifuddin.

“Excited to be able to bowl at the centre wicket for the first time after long break and I will work on these things so that I can develop myself,” he said.

“As there are a lot of matches in the coming days, I will focus on how fast I can get myself fit because it will be better for me as well as the team,” he concluded.