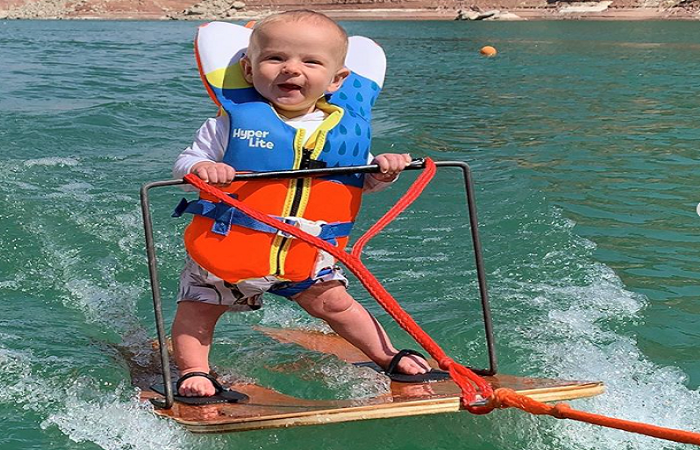 A six-month-old baby in the US state of Utah has broken a world record and become the youngest person ever to go water skiing. A video that has gone viral online and started a heated debate on social media shows Rich Humphreys water skiing at Lake Powell. The video was first posted to Instagram by the toddler's parents, Casey and Mindi Humpherys, from where it spread quickly, reports news website UPI.
Uploaded on an Instagram account dedicated to the toddler, the video shows him holding tight to a metal bar while being pulled along the lake by a boat. His father appears to be in another boat, keeping watch over the baby, who was seen wearing a life jacket with his feet strapped securely to the board.

"I went water skiing for my 6 month birthday. Apparently that's a big deal... #worldrecord," reads the caption.
The footage has garnered thousands of views and comments on Instagram. On Twitter, one version of the video has registered a whopping 7.6 million views.

The video has also divided opinions on social media. Some felt that at six months and four days of age, Rich was too young to be going water skiing. Others said that the baby was with his father and seemed to be following all safety norms and having a good time.

"This is child endangerment. Do not clap," one Twitter user wrote, while another remarked, "It looks cute and all but it could be dangerous too."

"I would like to offer your family a positive comment, he is so adorable and looks very loved by an adventurous family. I'm sure had you thought this wasn't going to be safe, you wouldn't have let him do it," an Instagram user said in response to the negative comments.

The previous unofficial world record for the youngest water skier was set by Auburn Absher, according to ABC News. He was six months and 10 days old when he went water skiing with his parents.