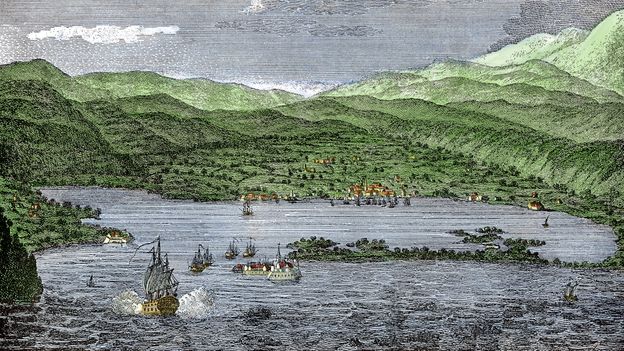 At 08:09 on the morning of 20 January 2020, an event took place that many Jamaicans thought they would never see. For the first time in 40 years, a cruise ship docked at Kingston’s historic Port Royal. An innovative new floating pier extended out and welcomed 2,000 smiling guests onto the island, with the vast Marella Discovery 2 dwarfing everything else in sight as they walked off.

It was a moment of pride for Kingston and its people, something that had long been talked about but had never come to fruition, thanks largely to political disputes and Port Royal’s lack of development. The arrival also marked a bright new chapter in the eventful history of Port Royal, a history that’s known to many Jamaicans but is seldom spoken about beyond its shores.

While Port Royal is now a relatively quiet fishing village at the end of a 29km sandbar extending out from Kingston, in the late 17th Century its reputation was so nefarious that it was considered by many to be “the wickedest city on Earth”.

Controlled by the Spanish for more than 150 years due to its strategic location, Jamaica was attacked by an English expeditionary force in 1655 and quickly turned into a profitable possession. The English lack of manpower, however, meant that to protect the island, then-governor Edward D’Oyley was forced to a recruit a coalition of pirates and privateers.

This, combined with the riches brought from trading slaves, sugar and logwood, saw Port Royal turn into an unhinged haven of alcohol, money and sex. Famous for a quarter of its buildings being either a bar or a brothel, the town quickly grew in wealth, and the pirates’ rapacious taste for excess and debauchery became the stuff of legend.

Attracting famous seafaring names of the age such as Captain Henry Morgan, they attacked and plundered the poorly-defended Spanish ports of the region (Morgan himself led violent sackings of Panama City and Maracaibo) while rapidly spending their riches on absurdly hedonistic lifestyles.

“These buccaneers had a free hand to literally do as they pleased, as they were viewed as being the defenders of Jamaica. The authorities had no option but to let them alone,” explained local historian Peter Gordon. “Imagine a city where lots of gold was born with these men of questionable character, and freedom to do what they wanted. Brothels, bars and churches were of equal numbers so you can imagine the rough atmosphere that was Port Royal.”

On the morning of 7 June 1692, however, that atmosphere and Port Royal itself were changed forever. Two thousand lives were lost as a massive earthquake destroyed much of the city. Port Royal would never be the same.
“The earthquake decimated Port Royal and its landmass, which was about 52 acres,” explained Selvenious Walters, technical director of archaeology at the Jamaica National Heritage Trust. “Approximately two thirds was destroyed and sank into Kingston harbour.

The earthquake decimated the buildings and a lot of people died from collapsing walls. Approximately, more than half of the population perished.”

The macabre nature of the Port Royal story makes its unfamiliarity outside Jamaica somewhat surprising. However, it’s the pristine condition of the underwater remains of the former pirate city that make the site truly remarkable. Lying just metres below the water’s surface in an oxygen-depleted environment, the submerged ruins are a time capsule of everyday life in a 17th Century colonial port town.

“It is believed to be one of the best-conserved underwater heritage sites in this hemisphere,” said Walters. “And it is perhaps the only one of its kind in this part of the world. So, it is very important not only for Jamaica, but the world as a whole, that we protect and preserve this valuable heritage asset.”

This “Pompeii of the Caribbean” is currently in the process of potentially becoming a Unesco World Heritage site and that recognition would be warmly welcomed in a part of the world that has thus far been underrepresented. But with its scandalous story and connections to the slave trade, are there any mixed feelings in Jamaica towards Port Royal in 2020?

“The people of Port Royal have always been pretty proud of their heritage,” explained Gordon. “Much of Jamaica’s population were enslaved Africans who evolved into skilled tradespeople, and some of the most skilled were actually here in Port Royal. We evolved out of slavery, but we actually created some of the most skilful artisans that ever was in this country. Port Royal was filled with such persons and, as their descendants, we are proud of our achievements.”

“It is a very big part of growing up in Jamaica,” said Heather Pinnock, general group manager of the Urban Development Corporation, a government department overseeing the redevelopment of the area. “Everybody learns the story of Port Royal. I think almost every child in Jamaica goes out to Port Royal; it’s like a rite of passage.”

“Honouring the Past, Visioning the Future” is the slogan that takes centre stage of the Port Royal 2020 project website. And while the arrival of the cruise ships was a big moment, there’s still much work to be done if the town will become the “world-class heritage, environmental and cultural attraction” that the project is aiming for.

With a few sleepy residential streets and a handful of bars, the Port Royal of today is a far cry from its decadent past. The rust-orange walls and protruding black cannons of the colonial-era Fort Charles are still alluring; while the charming Giddy House, a relic of the 1907 Kingston Earthquake that sits at a 45 degree angle, is one of the quirkier Caribbean tourist attractions. Yet the town currently lacks the infrastructure to handle large numbers of visitors that the cruise ships promise to bring.

Special permission is required from Jamaican authorities to scuba dive and see the submerged ruins of the underwater city up close. While that can be arranged, the challenge is to make it an authentic attraction that will bring the infamous story of the town to life.

A sustainable future for Port Royal is a big part of Pinnock’s work, and it’s not just the sunken city that will be a part of that. “You have the history but at the same time we’re honouring the biodiversity and looking really to the future,” she explained. “The entire area is designated as an environmentally sensitive site so there’s a lot that has come together. It requires a lot of thought and careful planning.”

Home to fragile coral reefs and threatened sea creatures, Port Royal’s sustainable development goals include reducing marine pollution, ending subsidies contributing to overfishing and reducing ocean acidification. These ambitious targets hope to be met by 2030 as part of a national drive towards sustainability, so it will be some time before anyone will be able to judge its success.

Sharing space with the reefs is the sunken city, and it’s hoped that visitors will be able to engage with the submerged remains as part of a proposed historical trail that will feature museums, interactive exhibits and archaeological dig sites.

While Covid-19 has meant low visitor numbers during much of 2020, development has continued afoot. And with the promise of cruise ships on the horizon in 2021 and many more visitors expected to become acquainted with its fascinating story, there’s an opportunity for Port Royal to truly put itself on the map. An opportunity that’s been a long time coming.

Sunken Civilisation is a BBC Travel series that explores mythical underwater worlds that seem too fantastical to exist today but are astonishingly real.