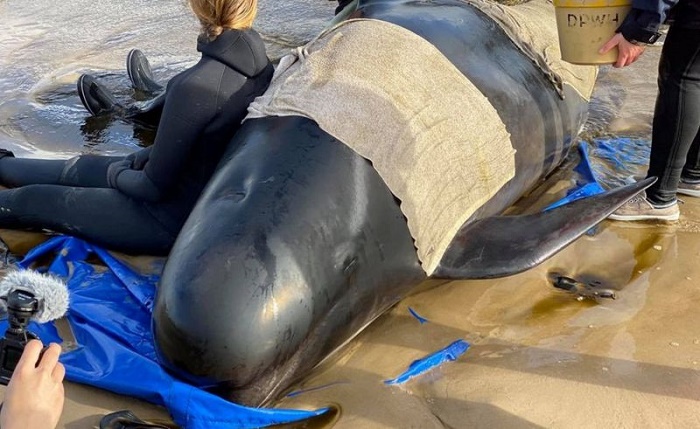 About 380 whales have died in what is suspected to be Australia's largest stranding on record, officials say.

Since Monday, hundreds of long-finned pilot whales have been found beached on Tasmania's west coast.

Rescuers had managed to save 50 by late on Wednesday, and they were trying to help the remaining estimated 30 whales.

Tasmanian government officials said the rescue effort would continue "as long as there are live animals".

"While they're still alive and in water, there's still hope for them - but as time goes on they do become more fatigued," said Nik Deka.

He added focus would now also shift to removing the hundreds of carcasses scattered along the coast.

It is not fully understood why the whales became stranded. The species is known to be prone to getting beached.

The stranding, one of the largest globally, eclipses a previous national record of 320 set in Western Australia in 1996.

Where were the whales found?

The whales largely washed up on sand spits in the waters around an area called Macquarie Heads.

The first rescuers on Monday counted about 270 whales, but a helicopter on Tuesday spotted another 200 dead whales nearby.

Officials said the second group may have washed in with the tide, but was believed to be part of the same pod.

What have rescue efforts involved?

A team of about 60 people have used slings and other equipment to help pull the whales off the sand banks so they are fully immersed in water.

Once the whales are "re-floated", they are guided back into deeper waters.

Rescuers said they had escorted 50 whales back into the sea, which they deemed a "success".

Rescue efforts had been hampered by a strong tide which had brought some freed whales back to shore, they added.

Whale experts said the surviving animals would be exhausted and weak. Pilot whales can grow up to 7m (22 ft) long and weigh up to three tonnes.

Without the buoyancy of the water, the whales would also be slowly crushed by the weight of their bodies, said Prof Peter Harrison from Southern Cross University's Whale Research Group.

Why do whales beach themselves?

Scientists say the reason is often unknown but they have a range of theories including whales being lured by fish to shore and becoming disorientated.

Pilot whales in particular are known for stranding in groups because they travel in large, close-knit communities which rely on constant communication.

Researchers say it's possible that one leading individual could have mistakenly led the whole group to shore.

It's thought that such groups are also susceptible around beaches which gently slope across a wide area - because their sonar pulses can fail to detect the shoreline in shallow waters.

More than 80% of Australian whale strandings take place in Tasmania and experts say Macquarie Heads is a known hotspot.