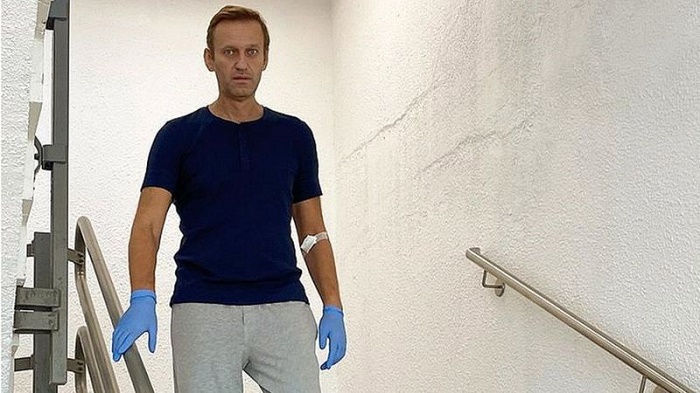 Putin critic Alexei Navalny has been discharged from a Berlin hospital where he was being treated for Novichok nerve agent poisoning.

The Charité Hospital said it was ending acute medical care because his condition had sufficiently improved.

Mr Navalny posted a picture of himself standing unaided with a message saying doctors had given him every chance of a full recovery.

His team alleges he was poisoned on the orders of President Vladimir Putin.

The Kremlin strongly denies any involvement.

Mr Navalny, a leading Russian opposition activist, collapsed on a flight in Siberia on 20 August. He was later transferred to the Charité hospital in the German capital.

What do his doctors say?

A statement from the hospital said that 44-year-old Mr Navalny had spent 32 days there, including 24 days in intensive care.

"Based on the patient's progress and current condition, the treating physicians believe that complete recovery is possible. However, it remains too early to gauge the potential long-term effects of his severe poisoning," it said.

Earlier this month the hospital revealed that Mr Navalny had begun to recover, saying that he had been removed from a ventilator and could leave his bed.

At the time, the German government said that laboratories in France and Sweden had reconfirmed German tests showing that the poison used on Mr Navalny was a Novichok agent.

The Kremlin has said there is no proof of that.

Mr Navalny's supporters initially believed that his tea had been spiked at Tomsk airport in Siberia before he caught a flight to Moscow. However, they later said that traces of the nerve agent had been found on a water bottle in the hotel room where he had been staying.

Mr Navalny became ill during the flight and the plane made an emergency landing in Omsk. Russian officials were persuaded to allow him to be airlifted to Germany two days later.

After tests confirmed poisoning with a Novichok nerve agent, the EU demanded a "transparent" investigation by the Russian government. "Those responsible must be brought to justice," a statement read.

In an Instagram post on Tuesday, Mr Navalny rubbished suggestions - purportedly from President Putin - that he had poisoned himself.

French newspaper Le Monde reported that in a telephone call with President Emmanuel Macron on 14 September, Mr Putin had spoken "with contempt about Alexei Navalny, considering him a simple internet troublemaker who had simulated diseases in the past".

"Putin has outsmarted me," Mr Navalny wrote on Instagram, mocking the Russian president. "He is nobody's fool. As a result, I, like a fool, spent 18 days in a coma but failed to achieve what I wanted. The provocation has failed!"

A nerve agent from the Novichok group was also used to poison Russian ex-spy Sergei Skripal and his daughter in Salisbury, England in 2018. They both survived, but a local woman, Dawn Sturgess, died after coming into contact with the poison.