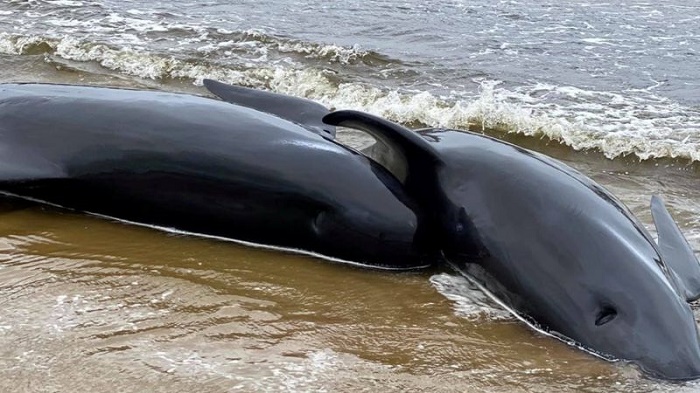 The Australian state of Tasmania has recorded its largest-ever stranding of whales, after more were found beached during a large rescue effort.

Since Monday, an estimated 470 pilot whales have been discovered stranded on Tasmania's west coast.

Most of the 200 whales in the newly discovered group appeared to have died, officials said on Wednesday.

They said rescuers were racing to save any animals still alive in shallow waters.

Although 25 whales from the first group were freed on Tuesday, some had beached themselves again after being brought in by the tide, according to officials.

"We're pretty disappointed that the number has increased and [there's an increase] in the number of whales that have died," said Nik Deka from Tasmania's Department of Primary Industries.

However he said rescuers hoped to escort more whales out to sea on Wednesday.

A helicopter team spotted the second group on Tuesday about 10km (6.5 miles) from the first site at Macquarie Heads. It is suspected they were part of the same pod.

"From the air, it didn't look like a rescue was needed but we are sending a boat over to do an assessment," Mr Deka said.

At least 90 whales from the first group have died.

It remains unclear what drew the whales to the shore, but scientists say pilot whales in particular have strong social bonds.

The small whales species is among the most common to become beached. They can grow up to 7m long and weigh up to three tonnes.

The Australian Antarctic Division said it was checking whether the stranding was also Australia's biggest on record.

"I'd say it's likely to be the largest… I can't think of a stranding that's larger than that," Prof Peter Harrison, from Southern Cross University's Whale Research Group, told the BBC.

More than 80% of Australian whale strandings take place in Tasmania.