A day of reversed roles in practice 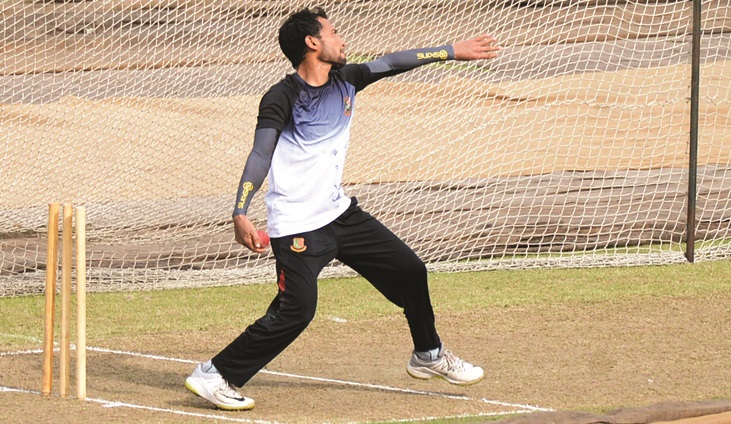 Bangladesh bowlers enjoyed a reversal of roles as the members of the batting unit were seen in a different role while the bowlers enjoyed their time with the willow at center-wicket in Sher-e-Bangla National Cricket Stadium on Tuesday.

The leg spin of Mushfiqur Rahim and the bowling of Imrul Kayes turned out to be the center of attraction when the cricketers went on to complete the net session after the break following their intense fielding session.

Mehedi Hasan and Taijul Islam, who also received some batting tips from none other than Tamim Iqbal after completing their session faced the duo while they were joined by Sadman Islam, who initially began bowling in the other net where Mustafizur Rahman and Taskin Ahmed batted where Nurul Hasan and Sadman bowled in pairs.

Bangladeshi pace bowling coach Ottis Gibson perhaps wanted to inspire the bowlers as he went on to bowl a few overs rather than playing his role which is limited to overseeing the pacers’ improvement and sometime picking up the stick to throw the ball.

In the recent past tail-enders were seen making contribution with the bat and Tigers’ team management looked determined to take that into account and make sure they also get a similar service from the bowlers.

“Today we (bowlers) had a batting session and we enjoyed it while we had substantial amount of time in the nets,” Taskin Ahmed told media after the practice session on Tuesday.

“We have to take up the challenge (of batting) because if we want to support the batsmen we have to improve,” he said.

“So, we are trying and we feel we have certainly improved and we are hopeful that in the coming days tail-enders will fare better,” he said.

Bangladeshi cricketers completed their COVID-19 test on Monday ahead of their proposed tour of Sri Lanka though there is no update yet regarding the fate of the tour.

According to BCB sources, the Sri Lanka series is very much alive as they feel if that was not the case they would have given them a negative answer by now while they are expecting an announcement shortly.

On the other hand, according to SLC sources, health ministry agreed upon 7+7 days of quarantine period which does not imply the tour is confirmed considering the Sri Lankan COVID-19 task force, who will have the last say regarding the duration of the quarantine, is not interested to allow it as they are saying that they are not willing to compromise on it more so after handling the COVID-19 pandemic so well.

BCB President Nazmul Hasan earlier said that his team will not travel to Sri Lanka for the three-match Test series if the 14-day quarantine rule proposed by Sri Lanka's health and security agencies was instated.

Bangladesh's tour of Sri Lanka, which was scheduled for July-August, was postponed because of the COVID-19 pandemic. Bangladesh, as per the current plans were expected to travel to Sri Lanka on September 27 but that was likely to be delayed for a few days for the three-Test series that is scheduled to start from October 23.

Bangladesh started their preparation for their tour of Sri Lanka by completing their tests for COVID-19 upon regrouping and the contingent includes cricketers, support staff and team officials.

BCB is not moving away from their initial plans as they are bringing the cricketers into the bio bubble environment by hosting a week-long residential camp ahead of the tour which will mark the resumption of competitive cricket for both the sides.

The final COVID-19 test will be done 72 hours before they take the flight bound for Sri Lanka.