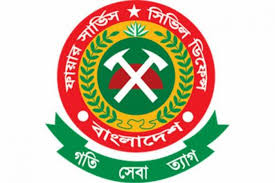 The Fire Service and Civil Defence (FSCD) has promoted its 19 officers as deputy assistant directors.

Brigadier General Md Sazzad Hossain, director general of the FSCD, wore rank badges to the promoted officers at a programme at the FSCD headquarters on Tuesday.

They will maintain duties as the chiefs of different districts, said Shajahan Shikder, deputy assistant director and in-charge of the FSCD media cell.

DG Sazaad Hossain directed the newly-promoted officers to do their duties with honesty and sincerity.

“It is very important for the district level officers to respond to any accident and calamity,” he said.

He hoped that the promoted officers would do their duties to protect lives and properties of people.

Senior officers of the FSCD were present on the occasion while Mohammad Saleuddin, assistant director (Dhaka Division) of the FSCD, moderated the event.