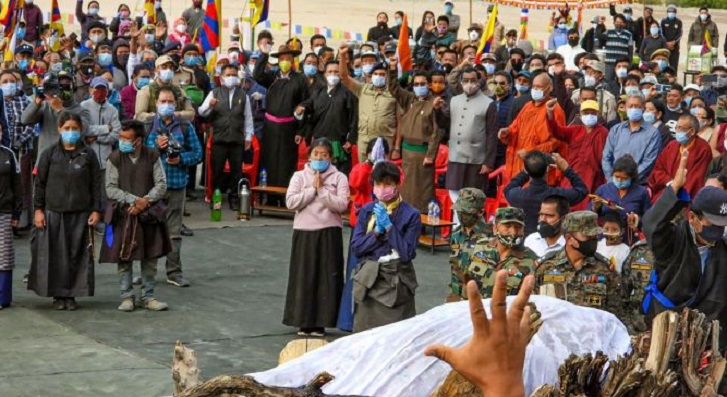 Ladakhis pay tribute to Special Frontier Force commando Nyima Tenzin, who lost his life at the Line of Actual Control, during his funeral in Devachan, Leh, September 7, 2020.

"China remains apprehensive that Tibet is a troubled part and trouble may erupt again as it did in 2008," says Amitabh Mathur, former senior Research and Analysis Wing officer and former advisor to the Union home ministry on Tibetan affairs.

In a detailed interview with Rediff.com's Archana Masih, Mr Mathur speaks about the impact India's deployment of Tibetan soldiers on the LAC would have on China and the Tibet factor in the India-China stand-off. The first of a multi-part interview:

Do you think it is time to remove the veil of secrecy from the Special Frontier Force?

Much has already been written about them and their existence is widely known, so there is hardly any secrecy left at all. I really wonder whether anything more needs to be said.

I am from the old school and think why should we reveal anything about our forces?

The country should handle SFF like all the instruments under its command. Information about the SFF's recruitment, postings etc are things that are best kept under wraps.

Even if the enemy knows about them, why put an address to them? There's really no need.

Since the SFF was involved in the military action against the PLA in the Chushul sector, what impact do you see this having on China?

Beyond the fact that the SFF is in the theatre, there is no official account and clarity on what action the SFF was involved in.

If you read Tibetan social media, it's as if they have declared war on China.

If you read the accounts that have been leaked by the government, SFF personnel stepped on a very old mine and was blown up.

It may be premature to talk of its success. But, yes, China has acknowledged its presence by firstly deriding the force and then trying to put out a narrative that Indians are using Tibetans as cannon fodder.

I would assume it has upset them immensely for the impact this development may have within Tibet.

Do you think that China will be concerned or nervous that Tibetan soldiers who worship the Dalai Lama have participated in this action against China?

They certainly would be concerned because of the impact it may have on the Tibetans within Tibet.

Sixty years on, China still has very stringent security measures in Tibet, and on the movement of Tibetans from one prefecture to another and various other restrictions.

All these point to the fact that they remain apprehensive that this is a troubled part, and trouble may erupt again as it did in 2008. In that sense, I think they would be very concerned as to what has happened.

As far as His Holiness is concerned, China never underestimates the power of the Dalai Lama. He is revered and 61 years since his departure, faith in him is unshaken inside Tibet and outside.

There have been more than 250 self-immolations demanding the return of the Dalai Lama to Tibet.

So certainly, China would be very, very, concerned.

How do you think this will be viewed by the Tibetans who live in our country?

From the feedback I'm getting and from Tibetan social media, I gather there seems to be a spate of Webinars being conducted by them. There is great excitement.

There is a somewhat louder emphasis on the theme of independence, especially amongst the youngsters.

We have to wait and see how the situation unfolds. But its importance also lies in the fact that the process for election for the Sikyong, the president of the Central Tibetan Administration, has commenced and the elections are next year.

This issue will become a consideration in this election.

The other thing is, where does it leave the monks?

His Holiness has always espoused that he would like a long-term and a peaceful resolution of the Tibetan issue which guarantees autonomy and protection of Tibet's unique identity, culture, religion and language.

Our people-to-people relations with Tibet are essentially post-1959. But before that for a thousand years, the Tibetans and the Chinese people have had a great relationship.

Tibetan religious monks, especially from the Karma Kagyu and Sakya sects, have had great following in mainland China.

The third Karmapa was given the black hat, which is now in Rumtek monastery, by the Chinese emperor.

There has been great intermingling and that puts them in an odd position for two reasons.

One, if the Chinese people continue to flock to places where the Tibetan monks give their teachings, any contact with them will be seen with suspicion.

Now if Tibet becomes violent, they cannot endorse it and neither can they ignore it.

By ignoring them, they fall by the wayside, and if they endorse it, they won't be called peaceful monks.

It's a complex reaction, but by and large, the Tibetan exile community seems to be very excited at what is happening, and very hopeful that it will be good for them.

Do you see a shift in India's One China policy?

I don't think we've changed in the way we run our China policy.

We follow the agreements that we've had with the Chinese since (then prime minister Mr Atal Bihari Vajpayee visited China in 2003 and recognised the Tibet Autonomous Region as part of the People's Republic of China, which is a somewhat nuanced position, that does not say that Tibet was always a part of China, but Tibet today is a part of China.

I don't think we are changing that position. A change would mean revoking and reneging on a lot of international agreements we have with China, and I think that would be, at least to my mind, not the case at the moment.

There was a feeling that India was downplaying its interactions with the Dalai Lama after Wuhan to assuage Chinese sentiments post Dokalam.

Government functionaries were told to stay away from the Dalai Lama's 60th year anniversary in India in 2018 due to the sensitive nature of India-China relations.

As someone who has been an advisor on Tibetan affairs, do you think that policy was misguided?

Every country has a right to make sure that no one -- Indian or foreigner -- does something to complicate its relationships with another country.

I'm not saying that His Holiness was doing that, but that's a precaution every country takes. But having said that, I feel there was really no purpose in that leaked circular.

If it was intended that it would assuage the Chinese, whoever wrote it was sadly mistaken. I think we could have done without that.

As far as His Holiness is concerned, people do keep meeting him. Dr Manmohan Singh met him as prime minister in 2010.

Even after this letter was issued, I remember that (now Union Sports Minister) Mr Kiren Rijiju, (then) culture minister Dr Mahesh Sharma, (Bharatiya Janata Party General Secretary) Mr Ram Madhav -- an all-party delegation -- went to Dharamsala to greet him in that limited 'Thank you India' programme that was conducted.

Soon thereafter, he presided over the convocation in Jammu university where Dr Jitendra Singh, minister of state for parliamentary affairs, was present.

I think that circular was unnecessary and shouldn't have been issued. The government made amends for it, but the damage was done.

The impression was created that we were trying to sideline the Dalai Lama and that was unfortunate.

The Dalai Lama: 'I am a Son of India'

At the official level, how do interactions with the Dalai Lama take place over the years?

Communication with His Holiness is a continuous process. It has never been disrupted.

He is a religious leader based in India, he is not a political leader and is not heading a government in exile. But people meet him to seek his views and he conveys his views to the Government of India.

There is a liaison office in Dharamsala and the ministry of external affairs keeps in touch with him.

There has never been any interruption or disruption in that. As an advisor to the MHA, I must have met him dozens of times.