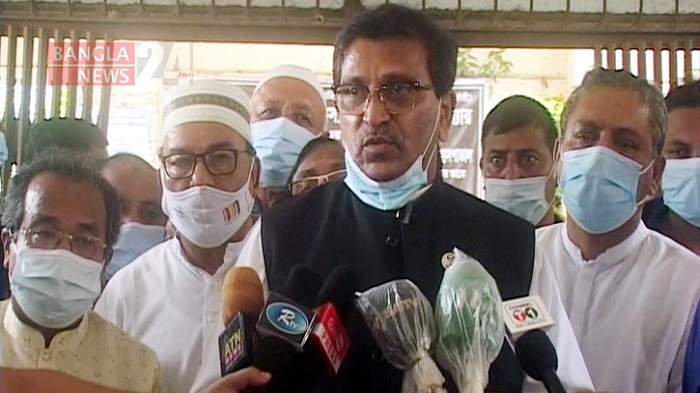 Criticizing the BNP’s top leaders for doing dirty politics over the health issue of Begum Khaleda Zia, ruling Awami League Joint General Secretary Mahbubul Alam Hanif on Tuesday said the BNP chief has been freed by Prime Minister Sheikh Hasina on humanitarian ground, but it is not clear why the BNP leaders are shamefully criticizing the government.

“BNP Chief has not been released through the judicial procedure…she was released through the virtue of Sheikh Hasina’s humanity, but BNP leaders are doing negative politics with it,” he said replying to a query from journalists before joining a hospital management committee meeting here.

The BNP leaders should appreciate the government as Prime Minister Sheikh Hasina has freed the BNP chief who was sentenced to seven years imprisonment in Zia Charitable Trust case on October 29, 2018, through an executive order by showing sympathy to her, the ruling party leader said.

But, the BNP leaders are making derogatory comments against the government which is manifestation of their dirty politics, he added.

Deputy Commissioner of Khustia M Aslam Hossen, District Awami League President Sadar Uddin Khan and its General Secretary Asgar Ali and other ruling party leaders, among others, were present on the occasion.

The government suspended the punishment of the 75-year old leader for six months in March this year as per the Sub-section 1 of Section 401 of the Code of Criminal Procedure (CrPC).