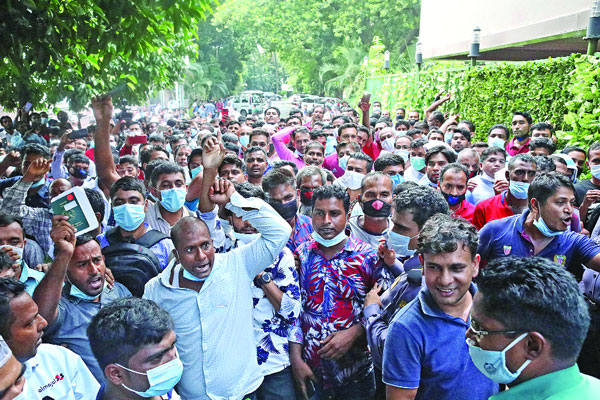 A group of Bangladeshi migrant workers demonstrated at Karwan Bazar on Tuesday morning demanding tickets to Saudi Arabia so that they can join their workplaces.

Several hundred migrant workers gathered in front of the Saudia Airlines office around 10am to secure tickets.

The airlines issued a notice that they have suspended issuing tickets, sparking protests. The workers then blocked the key Sonargaon crossing, halting vehicular movement for about an hour.

Saudi Arabia is set to allow flights from Dhaka from October 1 after around seven months of coronavirus restriction.

On Monday, Biman Bangladesh Airlines Managing Director Md Mokabbir Hossain said they got approval to operate flights to the kingdom from October 1.

Landing permission is required before beginning of seat reservation. But Saudi Arabia is yet to provide it, he said.

“So, now it’s not possible to start allocating seats for the passengers,” the MD said, adding that flights will be announced as soon as landing permission is received.

He also requested passengers not to gather at the counters before the flight announcement.

Seats will be allocated only to passengers who have a ticket to Saudi Arabia. For now, new tickets will not be sold.

Detailed information on seat allocation will be available on Biman's website from today.

The oil-rich kingdom is the most popular destination for migrant workers from Bangladesh. Last year, Bangladeshi migrants sent back US$18.355 billion. Of the amount, $3.647 billion (19.87 percent) were sent from Saudi Arabia.