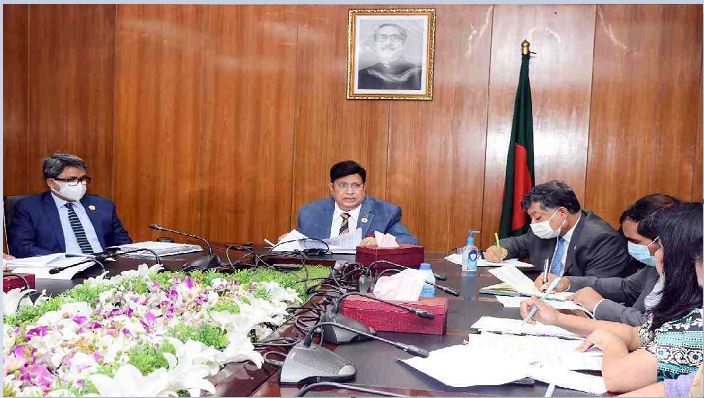 Prime Minister Sheikh Hasina will virtually deliver her key speech on September 26 highlighting global issues including Rohingya crisis and Covid-19 pandemic with a call to ensure corona vaccine for all at an affordable cost.

The centrepiece of any new General Assembly session is undoubtedly the General Debate, which starts on Tuesday, a week after the official opening.

The Foreign Minister briefed the media virtually on various aspects of the UNGA and Bangladesh's virtual presence.

Prime Minister Hasina will also deliver pre-recorded speech in a number programmes. The first speech is scheduled to be delivered at 4am on Tuesday.

The Prime Minister, like other global leaders, is joining the 75th UN General Assembly (UNGA) virtually due to COVID-19 pandemic.

Dr Momen said the Prime Minister will highlight vaccine issue so that everyone gets access to vaccine at an affordable price.

Dr Momen said the Prime Minister will emphasise that all must work together to address the global challenges.

He said he would attend a number of events virtually apart from representing Prime Minister Sheikh Hasina in some programmes.

The 75th UNGA session began on September 15 and this year, due to the ongoing global pandemic, it is unlike any other in the organisation’s history.

This month, there will be no bumping into presidents or the occasional global celebrity in hectic and sometimes crushed corridors at UN Headquarters in New York.

There will be no marvelling at seemingly endless presidential motorcades on First Avenue and no “standing-room only” moments in the gilded General Assembly Hall, as the Organization’s busiest time of the year is reimagined in the time of COVID-19.

The General Debate is a globally unique occasion at which presidents and heads of state (or sometimes their deputies or foreign ministers) take to the dais, and address a world audience on an issue of their choosing.

This year, because of the pandemic, the UN said, world leaders will be staying away and have been invited to send in pre-recorded videos of their speeches which will be broadcast “as live”.

Speeches are expected to be introduced by a New York-based representative of each state, who will be physically present.