Tens of thousands defy police crackdown to protest in Belarus 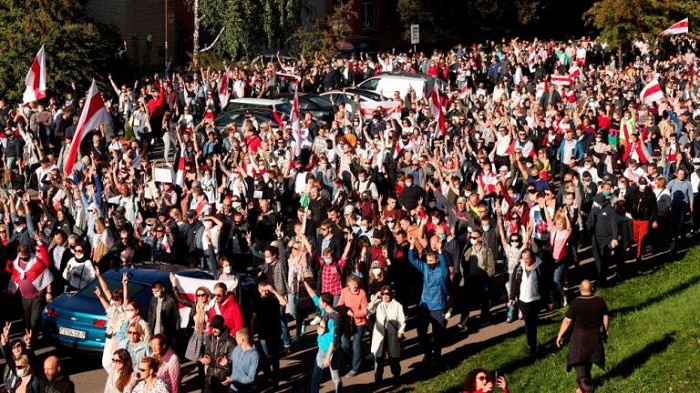 Tens of thousands of opposition supporters marched in the Belarusian capital of Minsk Sunday, defying a heavy security presence that included water cannon and armoured vehicles.

More than 100 people were arrested on the sidelines of that demonstration and similar protests in other major cities, the rights group Viasna said.

The protests came a day after police officers detained hundreds of demonstrators at a women’s march in the capital.

The opposition movement has kept up a wave of big demonstrations every Sunday since President Alexander Lukashenko won a disputed victory in August 9 polls.

In Minsk, people holding red-and-white protest flags gathered for the “March of Justice” walked through central streets holding placards with slogans such as “Cowards beat up women” and “Get out!”.

“Europe won’t help us get rid of Lukashenko, the people themselves have to remove him,” she said.

Several independent media outlets estimated numbers at tens of thousands, while the opposition newspaper Nasha Niva put the figure much higher at 150,000. Previous marches have drawn estimated turnouts of at least 100,000.

“I hope this won’t die down. We come out every time, it’s such a breath of fresh air,” said Maxim Karpov, 33.

“This all gives us strength to fight on.”

In the evening, large numbers of riot police with shields faced off against flag-waving protesters after detaining small numbers at the start.

Viasna said at least 80 had been detained in Minsk and 47 in other cities.

In the southwestern city of Brest, police said they fired tear gas at protesters during tense street clashes and added that one officer fired a stun grenade into the air.

The government ordered a reduction in mobile internet coverage during the protests, and central Minsk metro stations were closed.

Opposition leader Svetlana Tikhanovskaya, who has claimed victory over Lukashenko in the polls and taken shelter in Lithuania, praised demonstrators for coming out “to bravely stand up for what they want”.

The mass protest followed a police crackdown Saturday on peaceful women demonstrators who wore shiny accessories for a “Sparkly March”.

Protesters were dragged into vans, and some were lifted off their feet and carried.

Belarusian interior ministry spokeswoman Olga Chemodanova said Sunday that police had detained 415 people in Minsk and 15 in other cities Saturday for breaking rules on mass demonstrations. She said 385 had been released.