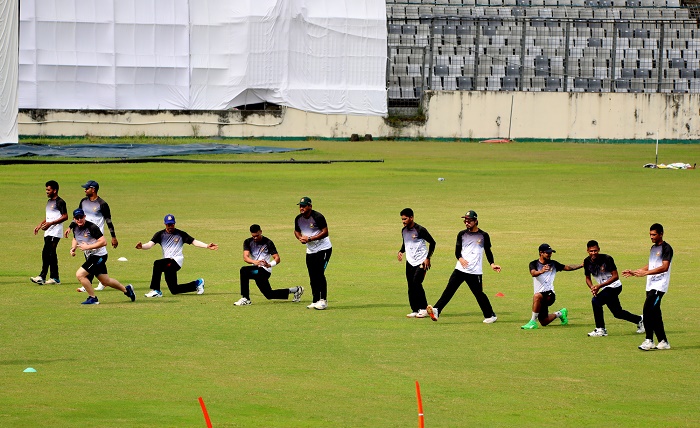 Bangladesh cricketers had the opportunity to practice as a group after 198 days as they began their skill training camp at Sher-e-Bangla National Cricket Stadium on Sunday.

A total of 27 cricketers have been called up for the skill camp. On the first day, 16 cricketers were present. The rest of the cricketers will join the camp from Monday, BCB officials said.

Since the outbreak of coronavirus in the country in mid-March, country’s cricketing activities have remained halted. However, cricketers returned to the ground on July 19 when the Bangladesh Cricket Board (BCB) organised individual training sessions. The players continued their individual training at different venues across the country. However with the three-match Test series in Sri Lanka approaching fast, finally BCB commenced group practice session but not before creating a bio-secure bubble for the cricketers.

Before starting the camp, all of the cricketers had to undergo a coronavirus test. BCB sent Tigers to Pan Pacific Sonargaon where the cricket’s apex board rented two floors for the cricketers, coaching and other staffs. Two buses have been kept ready for cricketers’ travelling from hotel to stadium. The bus drivers also have been in a bio-secure bubble along with others.

The cricketers began their activities with stretching before head coach Russell Domingo gave them some advice after calling all of them in a huddle. The cricketers then played a football match, split into two groups for some 20 minutes after which they started their skill training.

The skill camp began with a batting coach and spin coach. While batting coach Craig McMillan informed that he is unable to take up the role because of his father’s death, Vettori is yet to inform when he would join the camp. Vettori was earlier due to join the side in Sri Lanka but the difference in stance regarding quarantine period issue between BCB and Sri Lanka Cricket (SLC) changed the scenario as BCB told Vettori to come to Bangladesh.

“The skill camp was imperative since we have been out of cricket for a long time,” said Test skipper Mominul Haque.

“This is definitely good news (beginning of skill camp). We will be able to work with our technique, temperament, skill under the supervision of the coaches,” he said.

Mominul however didn’t see any issue with starting a skill camp without a spin and batting coach.

“We have done skill training without a specialist coaches before. The main thing is to work on one’s skills. Everyone knows their own strengths and abilities. Now it is the practice of batting, bowling and fielding which is important. It is better to have a specialist coach but that is not mandatory. Skill training means the practice of skills and that’s it,” he added.

Tigers are supposed to leave the country on September 27 if the tour is held as per schedule. But as of now Sri Lanka is yet to respond after Bangladesh made it clear that they would not tour the island nation if they are bound to stay in quarantine for 14 days. Bangladesh also wants practice facilities during the quarantine period which they said should not be over seven days.