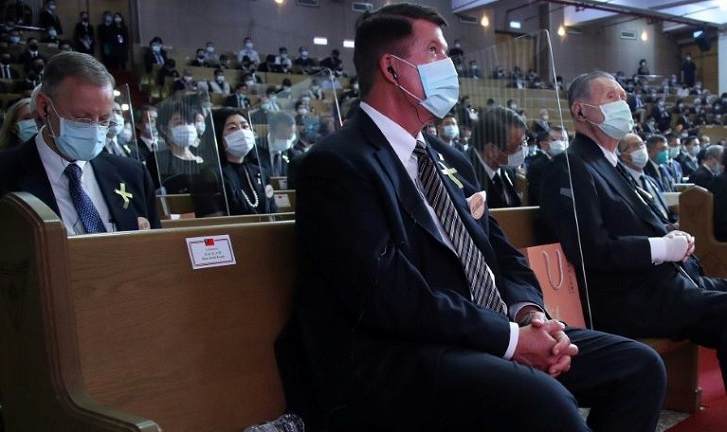 A top US diplomat attended the funeral for former Taiwan president Lee Teng-hui Saturday which featured a eulogy by Tibetan spiritual leader the Dalai Lama before wrapping up a visit overshadowed by Chinese military exercises.

Keith Krach, undersecretary of state for economic growth, energy and the environment, was the highest-ranking State Department official to visit Taiwan since 1979 when Washington switched diplomatic recognition to Beijing.

The trip, the second high-ranking US visit in as many months, sparked an immediate rebuke from China, which baulks at any recognition of Taiwan and has mounted a decades-long policy of marginalising the democratic island.

US Secretary of State Mike Pompeo accused China of "military blustering" as Beijing conducted military exercises on Friday near the Taiwan Strait during Krach's visit.

China's "provocative actions have violated our sovereignty and seriously damaged the status quo of peace and stability in the strait and the region," it said.

Krach attended the memorial service for Lee, sitting next to former Japanese prime minister Yoshiro Mori, before he is due to leave Taiwan later Saturday after a three-day visit.

Krach did not make any remarks at the service while in a pre-recorded video the Dalai Lama praised Lee's commitment to democracy.

"I admire his commitment to democracy and freedom ... as his close friend I always remember him and as a Buddhist I always pray," he said.

Like Lee, the Dalai Lama is also branded a "splittist" by Beijing which accuses him of seeking Tibet's independence from China.

Lee, who died in July aged 97, was a towering figure in Taiwan's history, helping the once authoritarian island transition to a vibrant democracy and later angering China by pushing for it to be recognised as a sovereign country.

China considers self-ruled Taiwan part of its territory, to be absorbed into the mainland -- by force if necessary.

Beijing has ramped up diplomatic, economic and military pressure on Taiwan since the 2016 election of President Tsai Ing-wen, who rejects its view that the island is part of "one China".

Washington's increased outreach to Taiwan under President Donald Trump has become yet another flashpoint with China as the countries clash over a range of issues of trade and security issues, as well as the coronavirus pandemic.

On Friday, Krach held closed-door meetings with Taiwan's premier and other top officials before joining President Tsai for dinner at her official residence.

"I'm sure the productive discussions we had today will bring Taiwan & the US even closer together & open the door to further collaboration," Tsai tweeted.

Trump has embraced Taiwan more closely as a way to hit back at Beijing, especially as he seeks re-election in November.

He has also approved some major arms sales, something his recent predecessors were more reluctant to do.