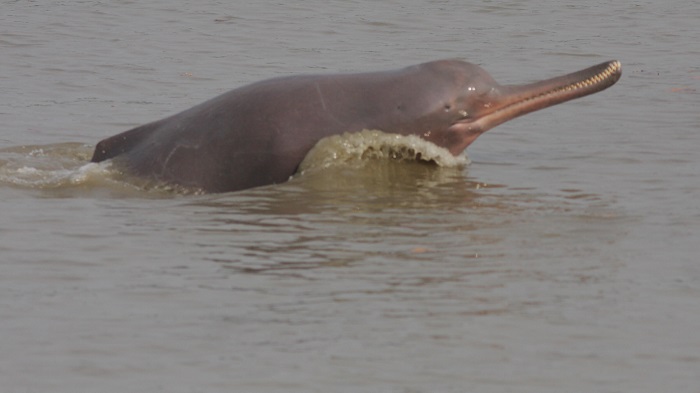 Experts from four countries -India, Bangladesh, Nepal and Myanmar have joined hands to enhance conservation of river dolphins in the region, paving way for regional cooperation.

A webinar on "Exploring the impact of COVID-19 on the ecosystem health of rivers and its dolphin population: Present status and future strategy for conservation in India-Bangladesh-Myanmar-Nepal" was organised by Inland Fisheries Society of India, ICAR - Central Inland Fisheries Research Institute, National Mission for Clean Ganga, Professional Fisheries Graduates Forum (PFGF) and Aquatic Ecosystem Health and Management Society.

During the session, Dr JK Jena, DDG (Fisheries Science), ICAR said, "These animals do not realise boundaries and have tried to find habitat wherever possible. Hence, regional cooperation is very important in conserving them."

Rajiv Ranjan Mishra, Director General, Namami Gange also shared his experiences on dolphin conservation linking its importance in the rejuvenation of Ganga. Continuous efforts of Namami Gange to bring dolphin conservation to national attention have resulted in the announcement of "Project Dolphin" by Prime Minister Narendra Modi under the Ministry of Environment and Forests (MoEF). This project will be in-line with "Project Tiger" which has successfully helped in increasing the tiger population.

Namami Gange has given importance to biodiversity and ecological improvement along with pollution abatement and projects have been taken up for the improvement of fisheries with CIFRI and for biodiversity conservation with Wildlife Institute of India (WII). Under this framework, this is a first of its kind occasion where the fishery sector is leading dolphin conservation discourse.

River Dolphins a unique species found mainly in rivers of Asia and South America are vanishing rapidly. Gangetic Dolphin, the national aquatic animal of India has been declared endangered by International Union for the Conservation of Nature (IUCN). This webinar was organised to discuss the future strategy to conserve and revive these Dolphins with regional cooperation.

During the webinar on Professor AP Sharma, former Director ICAR-CIFRI, Barrackpore, highlighted the need to research on dolphin habitat restoration and Dr. Dilip Kumar, Former Vice-Chancellor, ICAR-CIFE, spoke about the social aspects of fishermen's life and Dolphins in rural India.

As the Sunderban delta is a unique ecological space where Gangetic, as well as Irrawaddy Dolphin, are present, spread over India as well as Bangladesh, the conference gave a unique opportunity to the speakers to share experience on the dolphins.

It was also supplemented by Myanmar and Chilika Lake authority in the context of the Irrawaddy Dolphin.