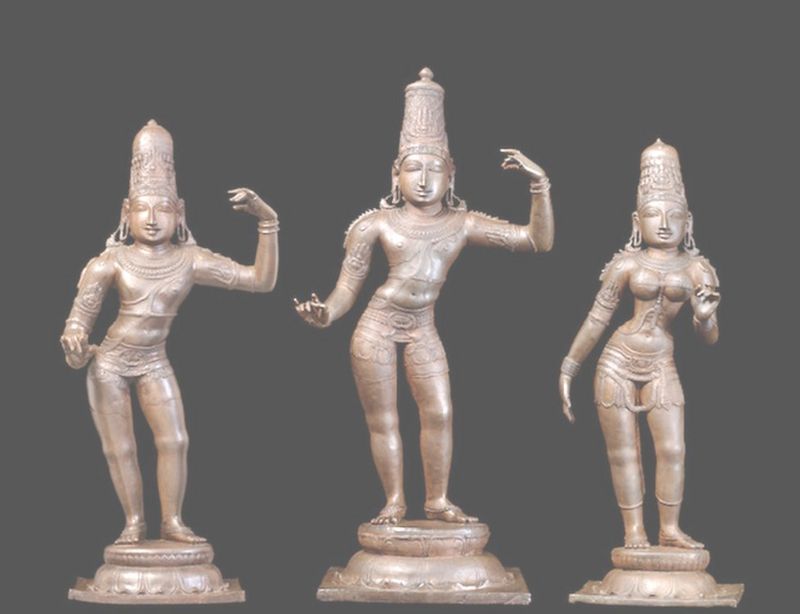 Three bronze sculptures stolen from a southern Indian temple more than 40 years ago were found in the UK, and returned to Indian government officials this week. Yogita Limaye reports on how the idols were discovered.

The bronze sculptures represent some of Hinduism's most revered deities - Lord Ram, his wife Sita and his brother Lakshman, all part of the same set of idols.

They belong to a 15th Century temple built during the Vijayanagara empire, located in Anandamangalam village in Tamil Nadu state, and were stolen in 1978. Vijayanagara was once one of the most important trading centres in the world.

It's taken years of work by a group of art enthusiasts, investigations by police teams in two countries, and efforts from Indian diplomats in the UK, to help bring them back.

Four years ago, a photograph of one of the sculptures was spotted on the website of the British Antique Dealers' Association by a member of India Pride Project, which works to bring stolen idols back to India.

S Vijaykumar, who co-founded the project, says: "We identified it as a Vijayanagara bronze, but could not work out if it was an idol of Lord Ram or Lakshman, as there are subtle differences in the posture [of the deities]."

The group knew there were some historic temples in southern India that had similar sets of idols, with the sculpture of Lakshman missing. So, they set out to try and see if the photographed sculpture matched such a set.

"We got leads [which took us] to districts and temples with similar styles, but we could not come up with any firm matches for three years," says Mr Vijaykumar.

Then, last year, one of the group's volunteers in London, while looking for Indian antiques on sale, found a grainy photo of a similar looking bronze, but with a different crown.

That's when it struck them, that they might be looking at a case where the whole set of idols was stolen.
They restarted their search, and found a crucial piece of the puzzle in the archives of the French Institute of Pondicherry in southern India.

A photograph taken on 15 June 1958, showed the full set of idols in the Sri Rajagopala Swamy Temple in Anandamangalam village.

Armed with evidence, the group approached the High Commission of India in the UK.

In September 2019, Indian officials passed on the information to the Metropolitan Police to ensure the idols were not sold while sufficient proof was being gathered.

Police say they contacted the dealer who had advertised the sculpture, and "established he was a good faith purchaser and hadn't committed any criminal offences".

In India, detectives from the Idol Wing of the Tamil Nadu police were sent to the village.

Locals confirmed that sculptures from the temple had indeed been stolen. But for hard evidence, the team had to search through hand written records in stacks of files stored at the local police station.

By January this year, the police found what they were looking for.
A complaint registered on 24 November 1978, showed that the theft had taken place the night before.

They also found judicial records which showed that three men had been convicted for this theft, and other similar crimes, in 1988.

Sources in the Tamil Nadu police have told the BBC they were given a prison sentence of nine months, and the main accused had said he sold the idols to people he didn't know.

How the sculptures were smuggled out of India and into the UK remains a mystery.

According to the Metropolitan Police, once the dealer was satisfied that the sculpture was a match, he voluntarily offered to return it.

What's more, he also had two other idols from the same set.

The handover was delayed because of the coronavirus pandemic, but it finally happened on 15 September.
According to the High Commission of India in the UK, the idols will be repatriated within the next few days.
But the set is still incomplete.

There is a fourth idol of the monkey god Hanuman, who according to Hindu mythology, is an ardent devotee and companion of Lord Ram.

Indian officials have told the BBC this sculpture is suspected to be in a museum in Singapore.
If the idols had been sold, they might have fetched millions of dollars.

"To me, they are priceless. They were never meant to be objects of art. They are meant to be worshipped.

It's important for collectors and dealers to recognise that these sacred bronzes have been stolen from temples which continue to exist," says Mr Vijaykumar.

"It pains the original custodians to see their gods being reduced to showpiece curios."