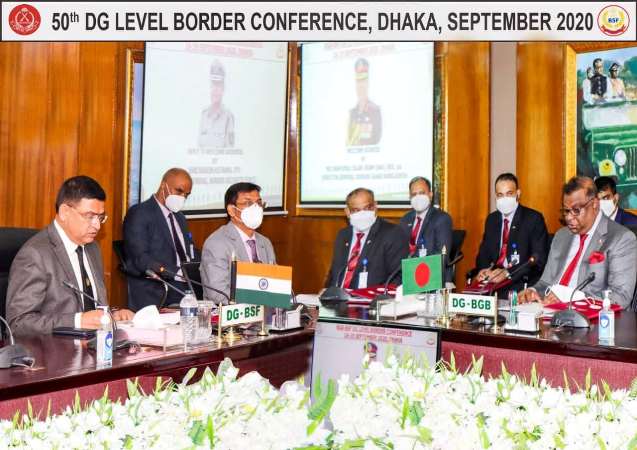 Paramilitary Bangladesh and Indian border forces  began on Thursday talks in Dhaka with host side highlighting killings of Bangladeshis on the frontier, smuggling of drugs and “push ins” from other side of the border as major issues of concern, a Border Guard Bangladesh (BGB) statement said.

“The conference discussed, issues of shooting dead and wounding of unarmed Bangladeshi nationals on the frontier, smuggling of drugs like phensidyl,cannabis, hooch, viagra/senegra tablets from other side of the border, weapon, ammunitions and explosives trafficking,” the statement said.

It said abduction and detention of Bangladeshis from border areas, push-ins of mentally imbalanced Indians were other two issues of concerns highlighted in the opening of the formal meeting led by directors general of BGB and India’s Border Security Force (BSF).

According to the statement two sides discussed as well issues relating to construction of different structures within 150 yards of the border, embankment protection of common rivers in bordering areas and construction of gallery at Banglabandha Integrated Check Post (ICP).

The ICP gallery is meant to allow people to witness joint retreat marking ceremonial lowering of national flags of the two countries.

BGB described the talks as a four-day conference, beginning yesterday, but said the formal talks started today and added that it is set to be wrapped up on Saturday with signing of Joint Record of Discussions (JRD).

The BSF delegation arrived in Dhaka on Wednesday for the deferred conference originally scheduled to be started earlier this week. But the BSF delegation could not reach Dhaka as scheduled on September 13 due to a technical glitch in their aircraft.

The DG-level conference between the two border forces began in 1975, while the talks are generally held twice a year, once in Dhaka and once in Delhi for management of porous 4,096 km long frontiers.