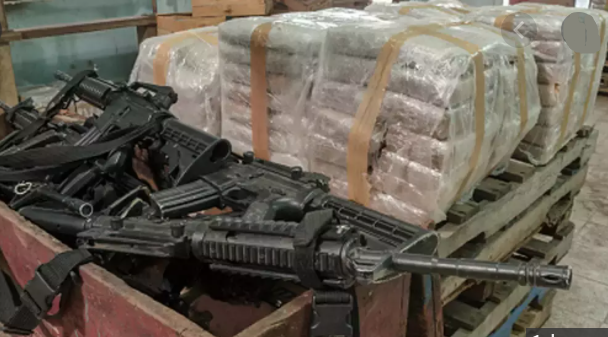 A major arms smuggling network backed by China in India’s eastern neighbourhood at Myanmar border that is fuelling insurgency in the region has been unearthed. ET has reliably gathered that a consignment of Chinese 500 assault ries, 30 universal machine guns, 70,000 rounds of ammunition and huge cache of grenades have been supplied to the insurgent group 'Arakan Army' (AA) fighting Myanmar state.

Similarly, another active insurgent group United a State Army (UWSA) has also been found to receive arms from China, persons familiar with the development told ET.

There are reports that seven insurgent groups in Myanmar are being allegedly funded by China.

The consignment reached AA via beaches of Myanmar border. The arms were allegedly dropped at Monakhali beach, ET has reliably gathered. AA has been allegedly targeting the India backed mega project  Kaladan Multimodal Project — at the behest of China, ET has learnt from persons tracking China's activities in the region.

Kaladan project passes through the Rakhine state and AA has been targeting the project that can transform the region.

The Kaladan project connects Kolkata with Sittwe port in Rakhine state by sea. In Myanmar, it will then link Sittwe port

to Paletwa in Chin state via the Kaladan river boat route, and then from Paletwa by road to Mizoram. The project will help in integrating economies of eastern Myanmar with India’s north eastern states and is expected create direct and indirect jobs and augment growth opportunities, besides promote smaller traders and enable peace and development of the region, explained persons familiar with the project.

In this backdrop and growing fear of debt trap, Myanmar has started pushing back against BRI projects in the country.

Myanmar Army has also discovered an alleged Sino-Pak axis that is supplying China made arms to AA besides Arakan Rohingya Salvation Army (ARSA), ET has learnt.

The nexus was revealed a couple of months back following arrests by the authorities of Thailand along the ThaiMyanmar border. The Thai authorities shared details of the investigation with Myanmar’s security establishment, ET has learnt.

ARSA has been accused of having connections with foreign terror groups. Abdus Qadoos Burmi, a Pakistani of Rohingya descent based in Karachi who is considered the group’s mentor, has called for “jihad” in Myanmar and has welldocumented links to LeT, sources alleged.