Alligator tries to eat turtle, it doesn’t go quite as expected 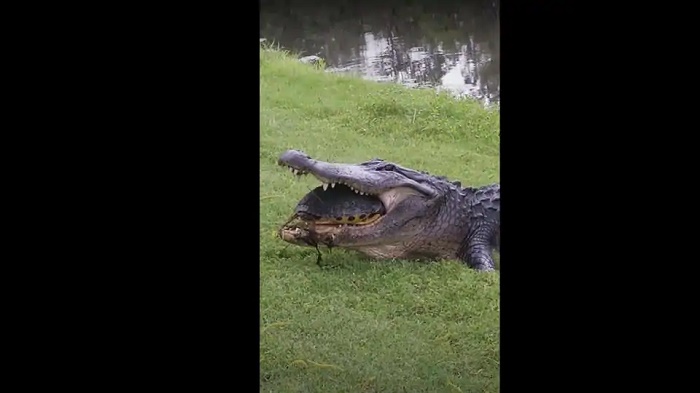 In a fight between an alligator and a turtle, most would place their bets on the apex predator to win. However, that isn’t what one sees in this specific incident captured on camera.

An old video going viral all over again, shows the moment a hungry alligator tried to devour a turtle as its meal. But things didn’t quite go the way the giant reptile may have expected.

The video was posted back in 2017 but has caught people’s attention again after it was shared on Twitter by Naveed Trumboo IRS. The YouTube channel HomeShark shared the video three years ago detailing that it was recorded in someone’s backyard in Hilton Head Island, South Carolina, US.

The video, best watched with the volume on, shows the turtle inside the alligator’s mouth. However, it is the turtle’s thick shell that helps it get away.

“Thick skin and a strong mind are essential if you want to survive in this world. Nobody can break you down if you don’t let them. -Unknown,” Trumboo wrote while sharing the video.

Since being shared, the video has collected over 2,400 likes and more than 500 retweets. Several people on Twitter dropped comments about the recording and the caption.

“So cute, poor guy was saved from the mouth of the crocodile… Thank god,” wrote an individual. “A rare moment to capture,” shared another.