Rohingya crisis requires a political solution which lies with Myanmar 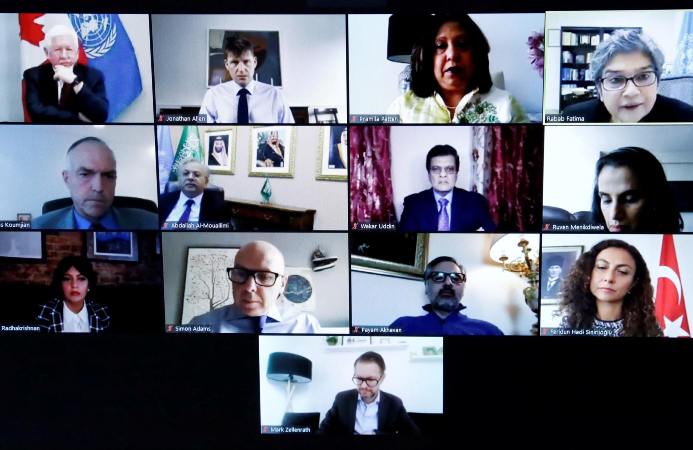 Permanent Representative of Bangladesh to the UN Ambassador Rabab Fatima has said Rohingya crisis requires a political solution, which lies in the return of the Rohingyas to Myanmar by addressing root causes, creating right conditions and holding the wrongdoers accountable.

She told this while speaking at a discussion on the Rohingya crisis held virtually on Wednesday.

The discussion, titled “Rohingya Crisis in its Fourth Year: Challenges in Securing a Sustainable Solution” was organized jointly by the Permanent Missions of Bangladesh, Canada, Saudi Arabia and Turkey.

The virtual discussion featured presentations, remarks, and suggestions from a wide range of stakeholders from the member States, UN, civil society and diaspora.

Nicholas Koumjian, the Head of Independent Investigative Mechanism on Myanmar (IIMM) presented the keynote speech and Ambassador Bob Rae, the Permanent Representative of Canada to the UN moderated the discussion.

In her opening remarks, Rabab Fatima said that Prime Minister Sheikh Hasina showed tremendous courage and compassion, when she decided to open the borders and provide the persecuted Rohingyas with shelter and protection.

She highlighted the current stalemate with the repatriation of the Rohingyas due to Myanmar’s failure to create conducive environment in Rakhine and expressed concern at the deteriorating situation in the Rakhine State.

Ambassador Fatima urged the International community to fully comprehend the multidimensional repercussions of this protracted crisis and step up their efforts in securing a permanent political solution to the longstanding humanitarian crisis.

Referring to the progress made in the accountability front, Ambassador Fatima called upon Myanmar to fully cooperate with the international investigative and judicial mechanisms including the IIMM, and ensure redress to the victims of the atrocity crimes.

She called for greater role by regional countries including the ASEAN member States, in addressing the root causes of the Rohingya crisis.

In his keynote presentation, the IIMM head described his efforts to reach out to all stakeholders including the Myanmar authorities for collection of information and evidence related to the human rights violations that have been committed in Myanmar since 2011.

He called upon the member States that are sheltering forcibly displaced Rohingyas to share information in their possession, and help IIMM fulfil its mandate.

Ambassador Bob Rae, reiterated his government’s consistent prioritization of the Rohingya issue and support to the accountability processes, including with the proceedings at the International Court of Justice.

He also called for greater international support for humanitarian and political solution to this crisis.

The Ambassadors of Saudi Arabia and Turkey commended Bangladesh for bearing the burden of hosting such a large number of Rohingya in its territory and assured of full humanitarian and political support towards its early resolution.

The Ambassador of United Kingdom recognized the importance of accountability for grave crimes including crimes of sexual violence against Rohingya women.

The EU Ambassador emphasized on implementation of the recommendations of Rakhine Advisory Commission.

The other speakers expressed commendation for Prime Minister Sheikh Hasina for her strong and courageous leadership in dealing with this longstanding humanitarian crisis.

They expressed their continued concern at the lack of progress in Myanmar, resulting in increased frustration among the Rohingya people living in Bangladesh camps.

They also opined that the success in accountability tracks would contribute in building confidence among the displaced Rohingyas and secure their peaceful and dignified future.

They called upon member States to extend cooperation in the ongoing investigation and other legal processes in respect of crime against humanity and other international crimes committed against the Rohingya.

There was urgent appeal from Diaspora representative to recognize the root causes including gradual disenfranchisement of the Rohingyas in Myanmar through citizenship law and other statutory provisions.

Some speakers expressed further concerns at the ongoing conflicts in Rakhine which reportedly could end up in further human rights violations of the remaining Rohingyas.

The speakers called for immediate attention of the Security Council and other responsible international entities of the UN to this matter, before it becomes a serious regional or global security threat.

Participants included delegates of various member states to the UN, the members of the relevant UN agencies, civil society, academia and media personnel.