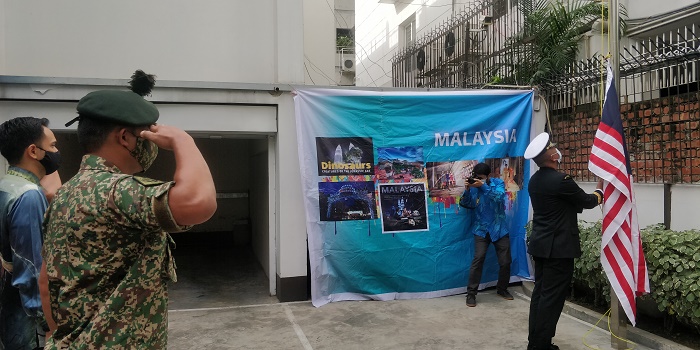 The High Commission of Malaysia in Bangladesh celebrated the Malaysia Day flag raising ceremony to commemorate its 63 years of independence and 57 years of the formation of Malaysia at the Chancery at Baridhara in Dhaka on Wednesday.

Acting High Commissioner Amir Farid Abu Hasan, officials of the High Commission and Malaysian diaspora in Bangladesh attended the ceremony which was held in a limited scale due to corona pandemic.

The flag raising ceremony was carried out by flag bearers from the Malaysian Armed Forces, said a press release of the High Commission.

In his remarks, the Acting High Commissioner suggested Malaysians to remember the struggle of the forefathers who made tremendous sacrifice for the nation.

He further noted that Tunku Abdul Rahman Putra Al-Haj, the first Prime Minister of Malaysia and Father of Independence, was a man who was ahead of his time as Malaysia had gained its independence through negotiations and diplomacy without a single drop of blood.

Amir Farid Abu Hasan further asked Malaysians to be proud of what the small nation of 32 million had achieved, turning it into one of the most progressive and dynamic countries in the world.

He also took the opportunity to express his country’s appreciation to Bangladesh for welcoming Malaysians and ensuring safety.

Apart from discussion, a 30-minute virtual e-concert performed by Malaysian Philharmonic Orchestra, showcasing local Malaysian music to the world. The e-concert was held in collaboration with the Ministry of Foreign Affairs of Malaysia.

Malaysia Day is celebrated on every September 16 to commemorate the formation of Malaysia with the inclusion of the states of Sabah, Sarawak (East Malaysia), Singapore and the Federation of Malaya (Peninsular Malaysia) in 1963. Singapore became an independent republic in 1965.