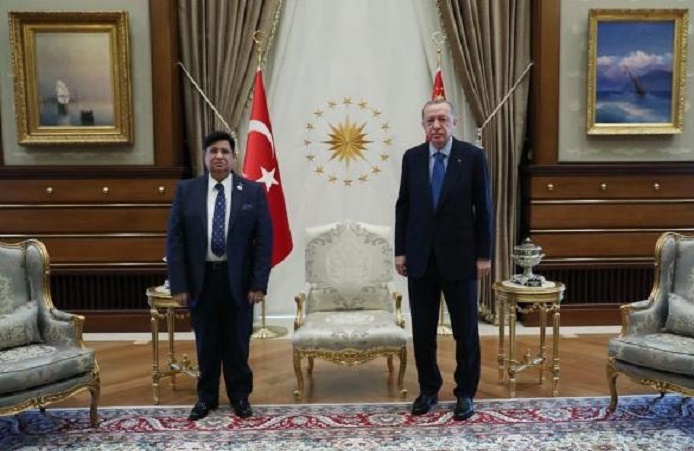 Turkish President Recep Tayyip Erdogan, who is the current chair of D-8, also known as Developing-8, has given his consent to visit Bangladesh early next year to attend the Summit of the seven-nation grouping scheduled to be held in Dhaka.

President Erdogan confirmed this when visiting Bangladesh Foreign Minister called on him in Ankara on Wednesday when they agreed to take Dhaka-Ankara relations at new height.

Bangladesh will take over as the next Chair of the D-8 through Dhaka Summit that was supposed to be held in May this year but delayed due to the pandemic.

During the meeting, the Turkish President laid emphasized on further expanding the D-8 grouping by including more states with the body. The D-8, Organization for Economic Cooperation, is comprised by eight countries – Bangladesh, Egypt, Nigeria, Indonesia, Iran, Malaysia, Pakistan and Turkey.

President Erdogan, according to a Foreign Ministry press release, has given importance on enhancing bilateral trade and called for taking fresh initiatives to exchange trade delegations between the two countries and participation of each other’s trade fairs and exhibitions in the coming days.

The Turkish President made several specific proposals to enhance bilateral trade between Bangladesh and Turkey, including removal of existing tariff barriers as well as investment in textile and pharmaceutical sectors. He also stressed for inclusion of more new items in the current trade list.

President Erdogan called for ensuring participation of both countries representatives and products in trade fairs of Bangladesh and Turkey.

He also asked the Bangladesh government to allocate necessary land for setting up a most modern hospital in Bangladesh with Turkish financial assistance.

Erdogan highly praised Prime Minister Sheikh Hasina for providing shelter to hundreds of thousands forcible displaced Rohingya population in Bangladesh and promised to stay with Bangladesh in all bilateral and multilateral forums to address the Rohingya problems.

He also assured Bangladesh to send more medical supplies and necessary support in response to Covid-19 pandemic in Bangladesh.

The Turkish President further said that he would pay visit to Bangladesh immediately after the Covid-19 situation improved to inaugurate the newly constructed Turkish Embassy in Dhaka.