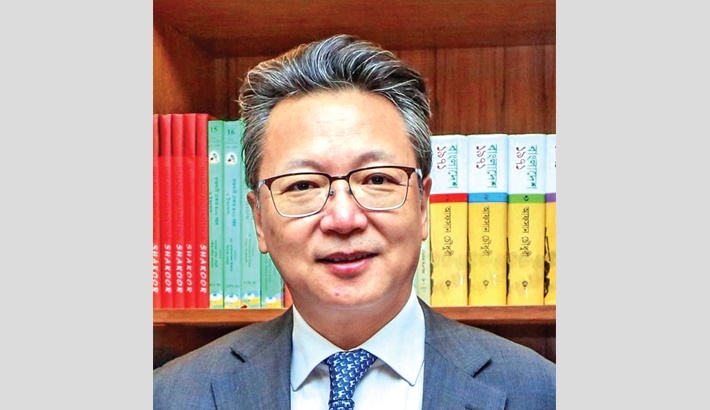 Recently, I had a catch-up phone call with my mother in China, when I realised the Mid-Autumn Day is just around the corner. Everyone in China is now back in their daily routine and busy with preparing for the traditional festival, making the COVID-19 outbreak earlier this year seem like a mere nightmare vanished into daylight, leaving no traces in people’s life - weren’t it for the grand national Awards Ceremony for COVID-19 Fighters held in Beijing on Sept 8 that reminded us again of the weight of the pandemic.

The ceremony China held to commend role models in the country’s fight against the COVID-19 pandemic was probably the world’s largest indoor gathering amid this difficult time. In a way, the event also symbolised that China had effectively curbed the spread of the coronavirus, and achieved a heroic feat in humankind's fight against disease. The meeting provided the nation with an opportunity to reflect on the "people's war" against the virus — not only the sacrifices and hardships it entailed, but also the Chinese spirit and the Chinese people's indomitable will. At the meeting, Chinese President Xi Jinping summarised China's spirit of combating the pandemic, which derives from patriotism, collectivism and socialist values, into priority on saving lives, nationwide solidarity and sacrifice, respect for science, and a sense of mission for humanity.

Saving Lives as the Absolute Priority

At the very beginning of the outbreak, The Communist Party of China (CPC) Central Committee declared that China would do whatever it would take to protect people's lives. The words are matched with actions. In the fight against the pandemic, people's lives always been the absolute priority to be protected and saved at all costs, be it a 30-hour old baby or a centenarian (both were real cases), fully reflecting the government’s principle of exercising governance for the people. The same principle is again well demonstrated by the fact that from the onset of the outbreak up to today, all the treatment costs of any confirmed patient, averaging from 15 thousand USD up to as high as 200 thousand USD were subjected to the state. After all, it has been, and will continue to be, the top agenda of the country to strengthen institutional guarantee for safeguarding people's lives and health to the greatest extent.

If anything, China’s story of combating the pandemic would one about solidarity and sacrifice. The CPC-led government adopted extraordinary measures to tackle the extraordinary incident of COVID-19, as its top leadership moved timely and resolutely to respond to the emergency, which enabled the country to mobilise and concentrate national resources to effectively contain the virus. Once again, the Chinese system was found to be the fundamental guarantee for resisting risks and challenges and safeguarding people's well-being in the country.

For the people’s part, the Chinese again proved themselves as a nation of unyielding will with the great sacrifice they made throughout the battle. Especially during the lock down of Wuhan city and Hubei province, the Chinese people was united as one and stood together during the darkest hours, including millions of health professionals fighting at the front line across the country. Over 2000 of the health professionals got infected at work, and dozens lost their lives for the greater good. Nearly half of the medical staff are young people below 30 years. Their sacrifices and contributions have been recognised by all and praised at the meeting.

Overall, China’s achievements of virus prevention and control is a success that is attributable to the "huge partnership between communities, scientific institutions, public health institutions in the government", and "a lot of cooperation, very sustained commitment to getting the job done", as Michael Ryan, executive director of the World Health Organization's Health Emergencies Program, said on Sept 7, 2020. Such commitment stems from a high level of public trust in the CPC and the government, and a strong social awareness of conforming to health protocols. Moreover, the State's huge inputs in forms of funds, manpower and resources also helped foster the extensive partnership and cooperation at a time when people were coming together in the face of a dire challenge.

The meeting on Sept 8 specifically commended four role models, all of whom doctors or top scientists with medical background. During the ceremony, President Xi presented the Medal of the Republic to the renowned top respiratory disease expert Zhong Nanshan, and the national honorary title "People's Hero" to Zhang Boli, a traditional Chinese medicine expert; Zhang Dingyu, head of Jinyintan Hospital in Wuhan, Hubei province; and Chen Wei, a military biomedical expert, for their outstanding contributions to the country's fight against COVID-19.

This underscored the spirit of respecting science in China's fight against coronavirus. "Faced with an unknown infectious disease, we uphold the spirit of science," President Xi said during the meeting, who also stressed that the laws of science were followed in making decisions, treating patients, making technological breakthroughs, and governing society. Under scientific guidance, the clinical treatment regime featuring a combination of traditional Chinese medicine (TCM) and western medicine for COVID-19 has been wildly adopted in China while also disseminated and shared to many countries.

A Sense of Mission for Humanity

Like Bangladesh, many countries and international organisations offered assistance and support to China during its difficult time. China also did its best to aid global fight against COVID-19, as it firmly believes that solidarity and cooperation are the only right choice for the international community to respond to a major crisis such as this pandemic, while selfishness and scapegoating will only harm all members.

Therefore, despite the stigmatisation and smears directed at the country by some western politicians who hold prejudice against China, it has never wavered in providing all it can to help other countries, including the US, in their struggles against the virus and to cushion the pandemic's economic repercussions. For this, the country had launched the most intensive and wide-ranging emergency humanitarian assistance actions since the founding of New China to provide a steady driving force for the global efforts of fighting the pandemic.

With concrete actions, China has been attributable to save a great number of lives from COVID-19 around the world, and has donated funds totalling $50 million to the World Health Organization, sent 34 medical expert teams to 32 countries and provided assistance to 150 countries and four international organisations. Between March 15 and Sept 6, China had provided 151.5 billion masks, 1.4 billion protective suits, 230 million goggles and 209,000 ventilators, to more than 200 countries and regions to support the global response, which took up a bigger share than any other country in the world.

During this process, the Chinese people have shown a strong sense of mission in contributing to the global efforts to defeat the disease. President Xi emphasised on this during the meeting when he said "we will also stand ready to work with other countries to make global governance more inclusive, the multilateral system more efficient and regional cooperation more robust". As the pandemic is still raging globally, China will continue to proactively support the WHO’s leading role and the international efforts to counter the disease, and work in collaboration with all partners for the global economic recovery in the post pandemic world.

Economy Turning for the Better

As of today, the Chinese mainland has not seen any local infections for nearly 30 consecutive days. All the new cases, counted in dozens each day, are imported from abroad and under quarantine. In total, China accumulated 90,666 confirmed cases, and 4,741 deaths so far, both comparatively low in absolute numbers or in case/population ratio. Notably, the test, trace, quarantine or treatment regime developed through the course has successfully thwarted a resurgence of the virus in a number of areas over the past three months after clusters of infections appeared, nipping any large-scale outbreak of the virus in the bud.

The economy is steadily turning for the better as the country has coordinated epidemic containment with economic recovery after the sudden outbreak of COVID-19. "China has become the first major economy to return to growth during the COVID-19 pandemic and has taken the lead in the world in both epidemic control and economic recovery," as President Xi said in the meeting. "This has demonstrated China's strong ability to recover and its enormous vitality." And with the situation generally under control, China has been able to ramp up the production of essential medical goods to support the pandemic control efforts both at home and abroad.

For China, the great victory against coronavirus spoke to the wise and trustworthy leadership of the CPC, and showed socialism with Chinese characteristics as the fundamental guarantee for risk response and governance capacity building. This health emergency also helped converge people’s social and cultural awareness that centred on the fine Chinese traditions of collectivism and altruism, which laid the foundation for national-wide involvement. In a broader dimension, it proved that 70 years into the founding of the People's Republic of China, the country is now strong enough to take any "turbulent tide" with composure.

As the first country hit by the coronavirus, China learned some painful lessons from the fight against COVID-19 but it is a price has to be paid, and a worthy price in the sense that the lessons have now evolved into valuable knowledge for other countries as well as our future generations to learn from so that greater loss could be avoided for the humanity as a whole. Equally importantly, China’s experience, which shows the virus is not invincible, could be a confidence booster for countries still struggling to gain an upper hand over the virus and those facing the risk of resurgence alike. COVID-19 is the gravest threat faced by the world in decades, and the great global anti-pandemic effort has demonstrated more than ever that building a community with a shared future for mankind is the right way to prevail over our common challenges and to build a better world for all.