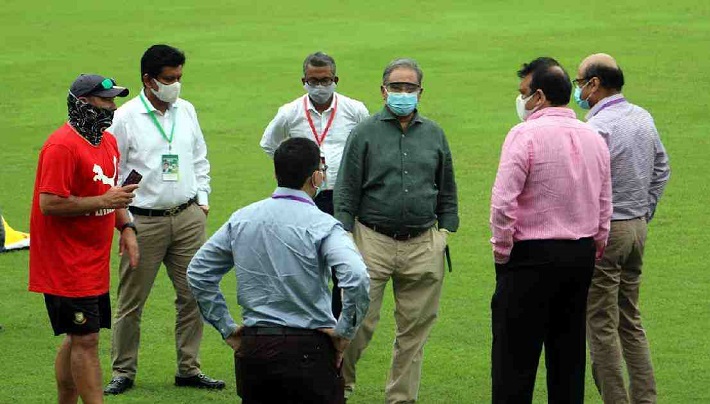 Bangladesh Cricket Board (BCB) President Nazmul Hasan said the series against Sri Lanka for three Tests is not possible if the hosts do not allow Bangladesh a shorter quarantine period and other facilities that have been sought earlier.

As per the Sri Lankan government’s regulation, everyone who enters the island nation is required a 14-day strict quarantine, but BCB agreed only for a seven-day quarantine. During quarantine, every member of the Bangladesh team and coaching staff will need to undergo Covid-19 Test thrice, and they only get permission to use practice facilities if they test negative.

“The terms and conditions Sri Lanka sent us are not possible to follow. So we think this series is not possible considering the current circumstances. We’re set to tell them our stance,” Nazmul told the media after a meeting at the BCB headquarters in Mirpur.

“What we’ve thought earlier is very different from the current scenario. And we think their arrangements are different from other countries who have already started playing international cricket,” the BCB chief said.

In other countries, a foreign team can start practice after a seven-day strict quarantine. But Sri Lanka proposed Bangladesh 14-day quarantine when every member of the team should stay at their hotel rooms.

“This is not a boys’ game, this is part of ICC World Test Championship. So we are unable to understand what they really want to say,” Nazmul said.

BCB has a plan to send High-performance Unit (HP) to Sri Lanka with the national team so that they can play practice game among them. Sri Lanka Cricket agreed to this. But the health department of the island nation cleared that they will not allow as many members with Bangladesh team.

Nazmul said: “We thought that Sri Lanka is safer than Bangladesh in terms of Covid-19 situation. So we planned to send our national team days earlier so that they can have a longer practice camp. But the current situation is so different. We don’t know the main reason behind this.

“They may have a dangerous Covid-19 situation but we don’t know. But they are hosting domestic cricket. So the real reason seems to be something else. We wanted to host our initial camp in Dambulla which is an isolated area.

“Despite that, they did not agree to a shorter quarantine period. I think this is a surprising move by Sri Lanka.”

This series was originally scheduled for July-August, but due to the outbreak of the virus, it was later rescheduled for October-November. It is part of the ongoing World Test Championship. Bangladesh have already played three Tests of this event and lost all of them.

BCB is now planning to host domestic cricket. Nazmul said the BCB is working to bring cricket back to the field.

“We don’t know if we can manage an international team to play in Bangladesh. But we are very hopeful of bringing the game back in the field. We may start domestic cricket soon,” he said.