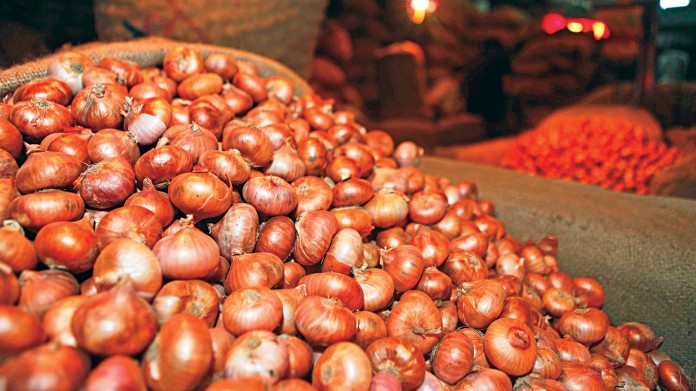 Onion price may spike further in the country due to a steep rise in the price of the much-consumed item in India, market analysts say.

They urged the government to search for alternative sourcing destinations so that onion can be imported during the lean period to avert recurrence of price volatility.

The import price of Indian onion was $150-250 per tonne till Wednesday but the Indian traders have re-fixed the rate at $300-420 per tonne from Thursday.

Heavy rain damaged early-Kharif crop and rabi stock of onion in India, one of the main import source of onion for Bangladesh.

Over the last two weeks, wholesale and retail prices of onion have more than doubled in several markets across India, Indian newspaper ThePrint reports.

Onion prices could touch Rs 100 per kg by October, the newspaper predicted.

He also suggested for exploring alternative source for importing onion.

Onion prices are witnessing a steep rise in retail and wholesale markets in several parts of India with excessive monsoon rains causing crop damage in some states and affecting the quality of stored items in some others.

The early-kharif onion crop in the two southern states of Andhra Pradesh and Karnataka, which is usually supplied across the country in the July-September period, has been badly damaged due to flooding.

Heavy rains in Gujarat, Maharashtra and Madhya Pradesh, the other major onion producing regions, have also hit the quality of onions stored from the bumper rabi harvest earlier this year, said several traders ThePrint spoke to.

As a result, the wholesale and retail onion prices have more than doubled in several markets as well as in major producing areas of India over the last couple of weeks.

Onion price witnessed a 557.8 per cent year-on-year rise after the Indian export ban.

According to TCB data, the price of local onion increased by 542.86 per cent while that of imported one by 572.73 in November last year compared to the corresponding period of the previous year.

A market analysis showed that the price hike, which stemmed from the ban India slapped on the export, is higher than the TCB’s estimation.

According to the Commerce Ministry, the annual demand for onion in Bangladesh ranges between 2.2 and 2.5 million tonnes. Although the country’s own annual production has risen, so has the amount imported over the last decade.