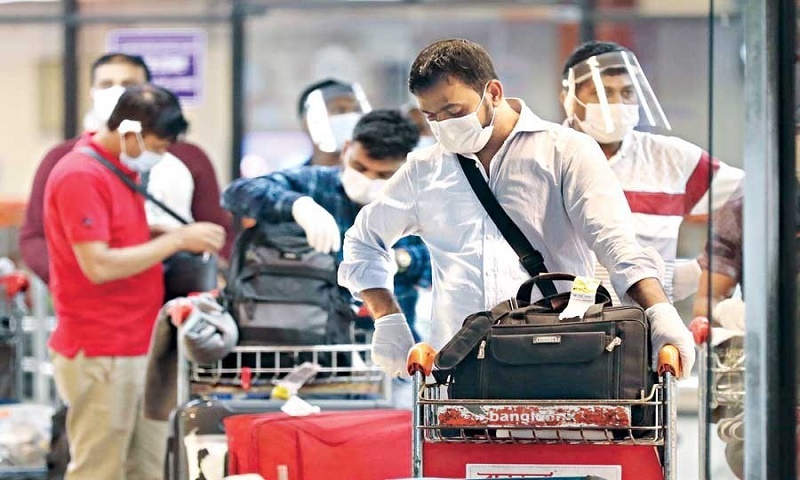 Shafiqul Islam returned home from Qatar in January on a two-month leave. Since the end of his leave, he has been trying to go back to his workplace in the oil-rich country but failed amid the ongoing wave of the coronavirus pandemic.

Shafiqul, a resident of Katiadi in Kishoreganj doesn’t know whether he will be able to return to his workplace in Qatar as validity of his visa is going to expire soon. He is now passing days with uncertain future.

Like Shafiqul, a large number of migrant workers, who came back home from different countries before or during the corona pandemic, have been facing similar situation.

According to Expatriate Welfare Desk in Dhaka, some 29,714 migrant workers, the highest number from a single country, have come back from the United Arab Emirates while 20,829 returned from Saudi Arabia, 7,941 from Kuwait and 7,769 from Qarar.

A total of 8,497 workers returned home from the Maldives while 11,133 returned from Malaysia, Thailand, Myanmar, Cambodia, Iraq and South Africa after losing their jobs.

Shariful Hasan, head of Migration Programme at BRAC, told the daily sun that the actual number of returnee migrant workers is much more than the figures provided by the government.

“Over 100,000-150,000 workers returned home on holiday from February to March when flights were open. Besides, another 100,000 workers were sent back home from different countries,” he said.

“On an average, 50,000 to 60,000 Bangladeshi people go to different countries with jobs every month. Since the outbreak of coronavirus their outflow has remained stopped. Therefore, at least 300,000 potential migrant workers have failed to go abroad due to the pandemic,” Shariful added.

International Organisation for Migration (IOM) has already warned that the number of returnee migrant workers would be multiplied by the end of the current year.

Nazneen Ahmed, Senior Research Fellow of Bangladesh Institute of Development Studies expressed the fear that returnee migrant workers may turn into huge burden if the crises are not addressed.

She said, “The remittance inflow still seems good thanks to the fact that the returnee migrants are coming with all their money they have earned. The real picture will come to light when they will spend all their savings.”

The government has already decided to provide an allocation of Tk 5000 million in loan assistance for the returnee overseas workers through Probashi Kalyan Bank.

The Wage Earners’ Welfare Board will distribute another Tk 2000 million to the returnee workers.