Trump Nobel Peace Prize nomination - what you need to know 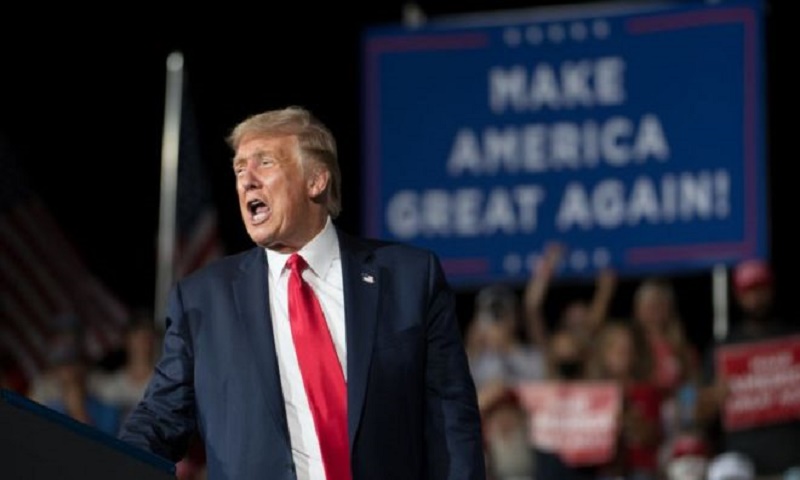 Less than two months before the US election, President Donald Trump seems to have something to celebrate - a nomination for the Nobel Peace Prize.

A far-right Norwegian politician has put Mr Trump's name forward for the 2021 prize, citing the president's role in the recent peace deal between Israel and the United Arab Emirates.

Christian Tybring-Gjedde told Fox News on Wednesday: "For his merit, I think he has done more trying to create peace between nations than most other peace prize nominees."

Adding that he was not a big Trump supporter, he added. "The committee should look at the facts and judge him on the facts - not on the way he behaves sometimes."

Of course a nomination is not the same as winning - we won't know the winner for another 13 months - so what can we make of this news?

So who gets to nominate a person?

For a nomination alone, the barrier to entry is low: all nominations from heads of state or politicians serving at a national level are accepted.

University professors, directors of foreign policy institutes, past recipients of a Nobel Prize and members of the Norwegian Nobel Committee are also among those deemed qualified to submit a nomination for the prize. The nominations require no invitation and as long they are entered before 1 February of the qualifying year, they will be accepted.

For the 2020 Nobel Peace Prize - the winner of which has not yet been announced - there were 318 candidates. The Norwegian Nobel Committee doesn't publicly comment on its nominees, which are kept secret for 50 years.

Has Mr Trump been nominated before?

And for the second time, he has Mr Tybring-Gjedde to thank. In 2018, the right-wing politician was one of two Norwegian lawmakers to nominate Mr Trump for the same prize, then for his efforts to bring reconciliation to North and South Korea.

Mr Trump did not take home the prize that year, but Mr Tybring-Gjedde, a member of the conservative Progress Party, insists the US president meets the criteria this time.

Last month, Israel and the UAE reached a deal to normalise relations, with Israel agreeing to suspend its controversial plans to annex part of the occupied West Bank - announced by Mr Trump in a surprise statement.

It is just the third Israel-Arab peace deal since Israel's declaration of independence in 1948, and marks the first official diplomatic relationship between Israel and a Gulf Arab country. Palestinian leaders were reportedly caught off guard by the agreement.

"This is a hard earned and well-deserved honour for this president," White House Press Secretary Kayleigh McEnany said on Wednesday. "Career politicians merely talk about the kind of results that this president has achieved on the world stage."

President Trump's critics say he is a polarising figure who exploits divisions rather than trying to bring Americans together.

Has a US president been nominated before?

Mr Trump is one of several US presidents to receive the peace prize nomination, including President William Howard Taft, President Herbert Hoover and President Franklin Roosevelt.

And if he were to receive the coveted award, Mr Trump would be the fifth US president to win, following Theodore Roosevelt in 1906, Woodrow Wilson in 1920, Jimmy Carter in 2002 and Barack Obama in 2009.

Mr Obama's nomination - after just months on the job - was met with criticism in the US, with some arguing he had not made an impact worthy of the award.

Among his detractors? Mr Trump, who tweeted in 2013 calling for Mr Obama's award to be rescinded.

The former Nobel secretary Geir Lundestad later said he regretted Mr Obama's selection. "Even many of Obama's supporters believed that the prize was a mistake," he told the AP news agency. "In that sense the committee didn't achieve what it had hoped for."

Have there been controversial nominations before?

While the award's most famous recipients include Martin Luther King Jr, Nelson Mandela and Mother Teresa - all who won the prize - the broad criteria for nominations means that past nominees have included highly unorthodox, and controversial, selections.

Adolf Hitler was nominated for the peace prize in 1939 by a member of the Swedish parliament. Reportedly submitted in satire, the nomination was withdrawn soon after. A few years later, the Soviet leader Josef Stalin was nominated for the same award, twice, garnering nods in 1945 - for his efforts ending WW2 - and again in 1948.

After nominations are submitted, the recipient is selected by a five-person Nobel Committee, which is appointed by the Norwegian Parliament. The winner of the 2021 prize will not be announced until October of next year.