Traffic chaos back in capital 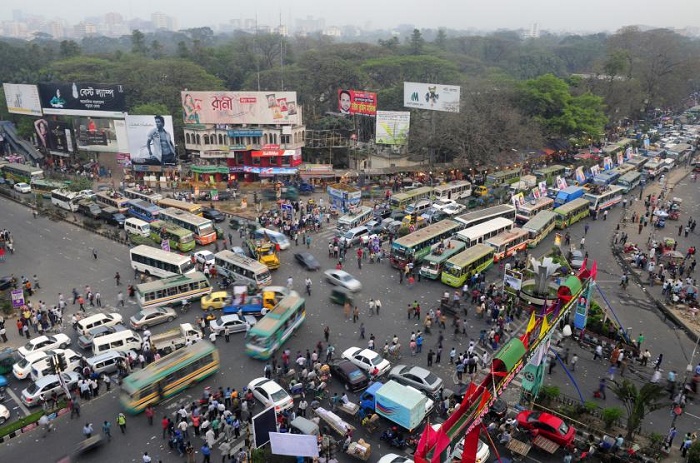 The plight of the city commuters, particularly those passing through Malibagh, Rampura and middle Badda routes, knows no bounds as traffic congestion has turned daily trips into nightmares these days.

Braving the coronavirus outbreak, a huge number of vehicles including many unauthorised ones hit the city streets bringing back the previous nagging traffic scenario in the capital.

Like other parts of the capital, a long traffic tailback on these routes is a regular phenomenon. Rampur and Badda link road areas have been witnessing unbearable traffic congestion for the last few days.

Travelling this 7/8 kilometres from Malibagh crossing to Natunbazar area takes one and a half hours and sometimes even to two hours on average.

But it is supposed to take only 15 to 20 minutes should there be no traffic jam, many bus passengers said.

Office-goers, students and even patients continue to suffer for the traffic tangles, especially during the morning and evening peak hours, to reach their destinations.  Such nagging traffic jam remains till midnight, many alleged.

Setting up makeshift shops on footpaths by hawkers, occupying front side by nearby shop owners, plying of a huge number of unauthorized battery-run rickshaws as well as man-driven slow-moving rickshaws, reckless driving of passenger buses of different bus companies, goods and bricks-carrying trucks are blamed for this traffic snarl on these busy routes.

The traffic situation was so acute that it took hours to travel even less than a distance of half a kilometer.

An inter-city bus passenger Rafiqul said it took three and a half hours to reach Gabtali from Jatrabari on Tuesday afternoon, which usually takes around one hour.

Like Rafiqul, many said now it takes them three to four times higher than usual to reach their destination.

The similar scenario is seen on other busy roads and thoroughfares in the capital including Mirpur-Farmgate road, Gabtali-Newmarket road, Mohakhali-Airport road, Gulistan-Jatrabari road, and Malibagh to Kakrail and Purana Paltan roads.

Besides, from the main thoroughfares to narrow lane and by-lane, everywhere in the capital was found traffic congestion.

Traffic congestion in Dhaka eats up around 5 million working hours every day and the average speed of vehicles during rush hours has come down to 5km per hour, according to the Accident Research Institute of BUET.

Experts say the government should take pragmatic steps, including ensuring sufficient mass transport and restoring discipline in the transport sector, to tackle the situation.

According to Dhaka Metropolitan Police (DMP) Traffic Department, traffic jam has become intolerable over the last few days in some city areas, including Malibagh-Kuril Biswa road, Mirpur-12 to Mirpur-10 crossing, Rokeya Sarani, Gulshan, Banani, Badda, Moghbazar, Eskaton, Tejgaon, Airport Road and Uttara, for many reasons, including the ongoing construction for metro rail and rise in private vehicles and slow-moving rickshaws on the streets.

Moreover, BRTA data shows that a total of 87,795 unfit motor vehicles are plying across the roads of Dhaka, posing a threat to road safety and contributing to traffic congestion.

Joint Commissioner (Traffic) Bashudeb Banik admitted that there are traffic congestion in some parts of the capital due to road digging and metro rail project works.

Besides, a huge number of passenger buses, private cars and battery-run rickshaws also returned to the city streets after a long break of lockdown triggered by coronavirus pandemic resulting in traffic jam, he said.

“We are trying our best to maintain discipline on the traffic system. As part of the move, our traffic sergeants are taking measures including filling cases against the errant transport drivers,” he added.