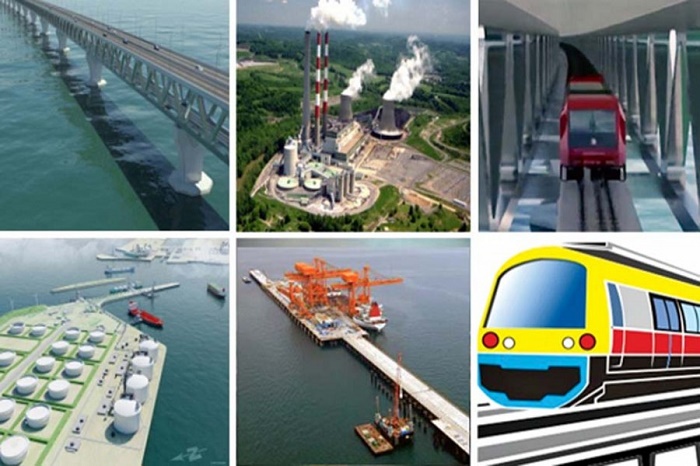 Covid-19 lockdown for two months from late March to May has put most mega projects to a halt except for some key schemes like Padma Bridge.

The important metro rail project, designed to ease nagging traffic congestion in the capital, came to a standstill during the lockdown and beyond as Japanese experts left the country in fear of health risks.

Work of other top-five priority schemes did not stop but remarkably slowed down.

“Mega projects are going through special monitoring now. All the necessary steps are being taken to speed up these projects. Foreign contractors and engineers have already returned to work,” Planning Minister MA Mannan said.

He also added that there is no financial crisis in mega projects and the government is providing all the necessary funds and other support to these priority schemes.

However, the project work is yet to get full momentum as many foreign consultants and experts and contractors have not returned to Bangladesh yet, official sources said.

In particular, the metro rail project is struggling to gain momentum. Japanese experts could not return to work while Bangladeshi officials cannot visit Japan as its government has put a travel ban on both its citizens and foreigners.

“Bangladesh government has stepped up diplomatic efforts to convince the Japanese government to lift the ban for the metro rail project,” a project official told the Daily Sun.

Currently, some Japanese experts are trying to monitor the project work remotely with the help of technology, the official added.

The most important Padma Bridge project was an exception as its work never stopped amid Covid-19 pandemic.

But it faced a setback after Chinese experts and workers got stuck in China from late December. Span fabrication work got hampered severely for the dearth of Chinese welding workers.

Besides, some span building material delivery from China was delayed after the coronavirus outbreak there.

Now, the project is facing high current problem in the Padma River, which has stopped span installation work for a few months although 10 spans are now ready for installation.

Recently, the project has faced a fresh blow after a good number of pre-cast roadway slabs and imported railway stringers were washed away by river erosion during the rainy season.

Finance Minister AHM Mustafa Kamal has said the project will take one more year and it will end in 2022 although its current date was June 2021.

Padma Bridge Project Director Shafiqul Islam is still hopeful that they will be able to install all the rest 10 spans by this December.

Meanwhile, reconstruction of the lost roadway slabs is underway at the Mawa project site while a fresh order has been placed to supply railway stringers from Luxemburg, according to Padma Bridge Project officials.

Because of Covid-19 onslaught, the mega projects faced a serious setback as marginally over half of the allocated ADP money could be spent in the last fiscal year.

The government had allocated Tk 308.55 billion for the top six mega projects last fiscal year, but only Tk 174.59 billion was spent until the penultimate month of FY 20, official data showed.

Renowned economic analyst and former lead economist at World Bank’s Dhaka office Dr Zahid Hussain suggested for a reshuffle in the government development spending, including fast-track projects, in consideration of the Covid-19 situation.

“Given the current situation, a new thinking is necessary for mega projects as well. Those mega projects should be prioritized which will ensure survival in the post-corona situation,” he noted.

For instance, ending Padma Bridge or metro rail projects is more important for the government in this situation compared to power projects, he explained.

“So, the government has to first set priority and formulate an action plan for their quick implementation,” he said.

Padma Bridge Project has so far witnessed overall progress of 81 per cent with main bridge construction advancing by 89.25 per cent and river training work 74 per cent.

Out of Tk 301.93 billion total project cost, its cumulative project cost stood at Tk 234.24 billion up to July this year, according to the latest fast-track project progress report.

The metro rail project, also known as MRT-6 line, has so far seen 49.15 per cent overall progress. The Uttara-Agargaon phase advanced 75.50 per cent and Agargaon-Motijheel part 42.50 per cent.

The country’s lone nuclear power plant project is being implemented at Rooppur, Pabna at a cost of Tk 1130.93 billion.

The government also made the highest allocation of Tk 148.46 billion against the scheme in FY20 to advance it further, but Tk 78.73 billion could be spent up to May.

The project’s cumulative financial progress was found to be 28.07 per cent with Tk 317.45 billion total expenditure up to July this year.

This Japan-assisted power plant’s progress was very impressive in the last fiscal year as it managed to spend Tk 32.01 billion in 11 months out of Tk 32.25 allocation in FY 20 revised ADP.

Cumulative expenditure of the scheme so far stood at Tk 133.03 billion or 37.39 per cent of the estimated cost and its overall progress was 31.60 per cent.

The important Padma rail link project is another priority of the government. It is being implemented at a cost of Tk 392.47 billion, which is even higher than that of Padma Bridge.

But its execution was very poor in FY 20 as only Tk 2.98 billion was spent against Tk 32.97 billion ADP allocation.

The key rail line project designed to develop tourism and regional connectivity could spend Tk 9.09 billion out of Tk 11.35 billion allocation until May this year from ADP allocation.

In 10 years, the project’s financial progress stood at 27.49 per cent with Tk 49.57 billion total expenditure while its physical progress was found at 41 per cent.

Meanwhile, the Rampal power plant has seen 49.57 per cent physical and 54.51 per cent financial progress with Tk87.22 billion total expenditure so far out of Tk 160 billion project cost.