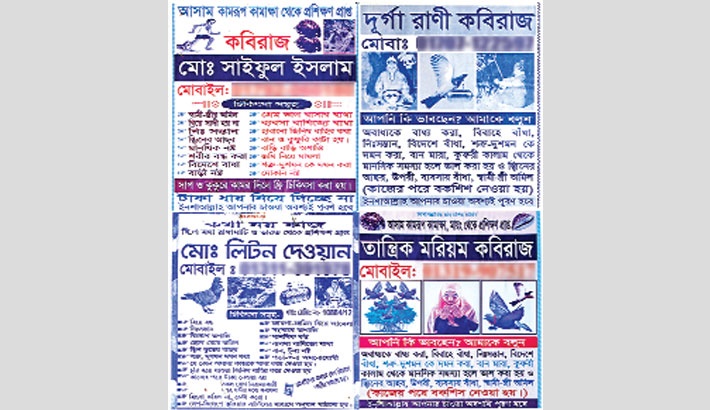 Quacks continue to allure patients with fake promises for quick recovery from different diseases within a short time, violating laws in the country.

Such a practice of treatment is commonplace in different parts of the country, thanks to the negligence of law enforcement agencies.

Popularly known as Kabiraj, quacks have been running campaigns in broad daylight, highlighting their experiences in the treatment of any disease.

They assure patients that any disease can be cured within 72 hours.

However, the administration remains silent about the fraudsters who have been running their business under the nose of law enforcers, many people have alleged.

According to experts, legal action should be taken against these fraudsters so that patients can avoid troubles.

Dr Ashis Kumar Chakraborty, managing director of Universal Medical College and Hospital Ltd, told daily sun, “Kabirajes introduce themselves as physicians. But they are not doctors. People, especially low-income group, who are unaware about modern medical treatment and believe in superstition, actually go to such a Kabiraj.”

Stressing the need for raising awareness among the people, he said, “This kind of treatment has no foundation. As a doctor, I must say that they are 100 percent fraud and not scientific. Most of the times they provide wrong treatment.”

Keeping faiths in their words, general people usually rush to Kabiraj or Hekim or Ayurbed while women patients are often raped.

Posters of various Kabiraj are often seen on the streets. They give fake promises to solve all kinds of problems, including family conflict, failure in love, damaged relations between husbands and wives, mental problems, brining enemies under control, loss in business etc.

They also can cure many diseases and have the amazing ability to give birth to a childless couple.

To get the treatment, people don’t need to take any medicine for this long term. No need to wait for days. All problems can be solved within just 72 hours! Even just through an amulet or by drinking some water supplied by Kabiraj.

No matter where you are in the country, if you book, you will get amulets and water. Wondering if it can be sent abroad or not. No problem, they will send it by courier. You do not have to spend much money for this! The total cost will be about Tk 2,000.

These posters are being pasted on different walls of Dhaka city. There are at least 10 such posters. The statement of all the posters is almost the same. Only Kabiraj and mobile numbers are different. The campaign is going on in the name of Tantric, Kabiraj, Ojha and Boidya.

Meanwhile, the administration has not taken any effective steps despite such public deception. In this situation, innumerable people are constantly being deceived by stepping into the trap of propaganda.

Their healing systems are popularly known as Kalami, Bhandari and Kabiraji according to language and regions in the country.

The incidents of murder, rape and blackmailing have been reported against those Tantric, Kabiraj, Ojha and Boidya.

Law enforcers brought many fraudsters to book, but their misdeeds continue by taking advantage of traditional beliefs and superstition of many people in the country.

After hearing all this, Moriom said if you take an amulet and water from me, the ban (obstacle) will be cut. For this you have to pay Tk 2,200.

When the patient (reporter) expressed his desire to take the medicine after met her directly, Moriom said, “I can’t be seen because I live far away.”

“I will meet you in the interest of curing the disease as far as possible,” the reporter said, Moriom replied, “I live in the deep forest of Bandarban. So, this is no way to meet me directly.”

However, she assured the patient, “I will send the amulet to the courier. The results of the amulet will be available within 72 hours.”

An ill teenage girl went to a Kabiraj (herbal practitioner) for her treatment but instead she was raped by him. The incident was disclosed on February 7, 2020. The alleged rapist is Kabiraj Kamruddin of Rahimpur village in Biswanath upazila of Sylhet.

On January 5, 2019, police arrested a Kabiraj for allegedly raping a minor girl at Daudkandi in Cumilla. The arrestee was identified as Nur Islam Gazi, 34, son of Chand Mia of Bohalgachia village in Sadar upazila of Patuakhali.

On April 13, 2017, Kabiraj Saidur Rahman Dewan allegedly raped a woman after she went to him for treatment in Bagmara upazila of Rajshahi.

When contacted, Walid Hossain, deputy commissioner (media and public relations) of the DMP told daily sun, “Although we have not received any allegation of such fraud. But people should be aware about this kind of fraud. If anyone deceived by this kind of fraud gang, they must inform to police. We will definitely take action if anyone complains.”