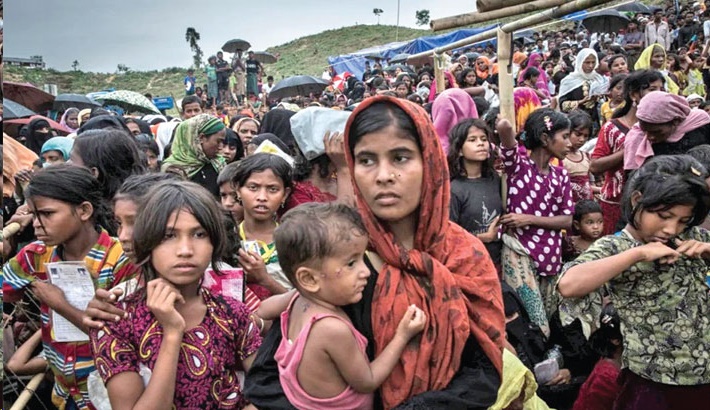 The exodus of 1.1 million persecuted Rohingyas from Myanmar to Bangladesh has marked the completion of the third year without any substantial progress in repatriation of these hapless people to their homeland.

Since the Rohingya exodus in 2017, there had been some hue and cry in international forums over their systematic persecution by the brutal Myanmar army force, but the world body and international human-rights organisations have not succeeded in putting up effective pressure on the Myanmar authorities to take back their nationals with dignity and in safety.

Despite having resource constraints, Bangladesh has given shelter to the persecuted Rohingyas purely on humanitarian grounds and had expected the world powers would take steps for a peaceful solution to the crisis through negotiations with the Myanmar authorities.

There had been several international moves, but ended in nothing burger. The question is how long Bangladesh would endure this burden that costs heavily on Bangladesh’s economy and ecology.

Does the international community honestly want to resolve the world’s biggest humanitarian crisis?

From the very beginning, Bangladesh has tried to find a peaceful solution to the crisis through bilateral consultation for sustainable early repatriation with safety, security and dignity. There were bilaterally agreed Framework Arrangement and other instruments for the repatriation.

Bangladesh also tried repatriation twice at Myanmar’s insistence and the encouragement of a few other countries. But, those moves failed as Rohingyas do not feel comfortable in the prevailing condition in Rakhine of Myanmar due to lack of sincerity of the Myanmar government in creating a congenial environment.

Bangladesh believes friends of Myanmar and other countries in the region might use their good offices to convince Myanmar of the imperative to make material changes in Rakhine security-wise, economically and politically.

Sadly, many international interlocutors are found trying to appease Myanmar while heaping all their demands on the doorstep of Bangladesh, the second victim of the Rohingya crisis.

Dhaka expects international partners to convince Myanmar to change course and to play their roles as agreed with Myanmar at paragraph 14 of the Framework Arrangement.

On August 25, the US State Department in a statement urged the authorities of Myanmar to establish conditions conducive to the safe, voluntary, dignified and sustainable return of the persecuted and displaced Rohingyas.

The statement said the US has taken strong actions including financial sanctions and visa restrictions on top military leaders and units linked to serious human-rights abuses, supporting the UN investigation mechanism and encouraging Myanmar to participate fully in International Court of Justice proceedings and comply with the court’s order.

The British High Commission in Dhaka in a statement marking the completion of the three years of the Rohingya exodus promised to continue advocating for accountability on the part of Myanmar for the crimes committed against the Rohingya population and push for the safe, voluntary and dignified return to their homes in Rakhine state.

Myanmar says it has created safe conditions for the Rohingya return, but Bangladesh and the United Nations say that fighting in Rakhine and a lack of human rights guarantees make a return dangerous for the refugees.

Rohingyas say they will not go back without guarantees of rights now denied to them, including citizenship and freedom of movement.

Dhaka strongly believes that China can play a leading role in resolving the Rohingya crisis and can lessen the burden on Bangladesh as Beijing has got great influence and strong ties with Myanmar. China is also a great development partner of Bangladesh.

Chinese top leadership in response to Bangladesh’s requests had assured time and again to play a role in finding a sustainable solution to the crisis, diplomatic sources said.

On the sidelines of the UN session last year, representatives of Bangladesh, China, and Myanmar in an informal meeting in New York had reached a consensus on starting Rohingya repatriation as early as possible, forming a joint working mechanism within the three countries and promoting development in the area as a fundamental solution.

Diplomatic and political circles feel given the prevailing friendship and cooperation with Myanmar and Bangladesh, China should come forward, take the lead and bring about an amicable solution to the crisis in the light of recommendations of the Kofi Annan Commission and ensure peace and stability in the region.

However, a top-ranking Bangladesh government official said it’s true that China wants to resolve the crisis, but they are not doing enough to oblige Myanmar to create a conducive environment for them to return.

Over the past three years, China and Russia opposed various moves, including in the UN Security Council and other international bodies about action against Myanmar, but since after the visit of Prime Minister Sheikh Hasina to China on July 1-5, 2019, China is understood to have taken a new position on Rohingyas to help settle the impasse between Bangladesh and Myanmar.

Talking to the Daily Sun, a Chinese diplomat in Dhaka said China is fully aware about the Rohingya situation and will continue to play a mediator’s role between Bangladesh and Myanmar in finding a quick and effective solution.

He said instead of internationalising the issue, China would try to persuade Myanmar to resolve the crisis through bilateral dialogue. The return of the forcibly-displaced people to their homeland would be a solution, China felt.

President Xi Jinping said there should be a quick solution to the Rohingya crisis so that the displaced people can go back to their homeland.

Prime Minister Sheikh Hasina’s sought Chinese “goodwill” to facilitate the return of the refugees to their homes. In response, Xi Jinping said his country would do its best to resolve the problem as both Bangladesh and Myanmar were “close friends” of China.

Significantly, the Communist Party of China came up with an assurance that it would contact senior Myanmar leaders to amicably solve the crisis and start the repatriation as soon as possible.

In a subsequent joint statement by the neighbours, China reaffirmed its willingness to continue to mediate, while Myanmar thanked China for “its understanding of the Rakhine problem, its difficulty and complications”.

The visit’s main focus was China’s massive infrastructure projects, including a controversial hydropower dam and a deep-sea port in Rakhine, that make Myanmar a vital link in Xi’s flagship Belt and Road Initiative to expand trade ties globally.

Western Myanmar, with its location between booming India and Southeast Asia, is strategically important to Beijing, offering China’s landlocked western provinces potential port access to the Indian Ocean and the Bay of Bengal.

“We have facilitated and hosted three foreign minister meetings between China, Myanmar, and Bangladesh to work for an early repatriation,” Luo Zhaohui, China’s Vice-Foreign Minister told news conference ahead of Xi’s trip to Myanmar in January.

Beijing’s last major effort to kick-start repatriation was in August 2019 after Myanmar compiled a list of 3,000 Rohingyas approved for return. But that effort failed after hundreds of the refugees on the list went into hiding to avoid being sent back.

During Indian Foreign Secretary Harsh Vardhan Shringla’s visit to Dhaka on August 18-19, Bangladesh Foreign Secretary Masud Bin Momen congratulated his counterpart on India becoming a non-permanent member of the UN Security Council and conveyed Bangladesh’s greater expectation from India as a member of the UNSC, to play a more meaningful role for a lasting solution to the Rohingya crisis, including their early repatriation to Myanmar.