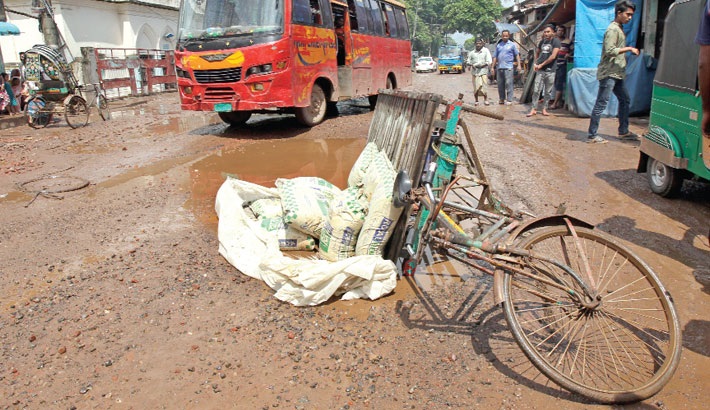 Sadarghat Strand Road in Chattogram city has developed numerous potholes, hampering smooth traffic movement. The photo taken on Saturday shows that a rickshaw-van has got stuck in a pothole. —Rabin chowdhury

Dilapidated condition of most of the roads in the port city has been causing immense sufferings to the commuters.

Elderly persons and patients are the worst victims of the bad condition of the roads which is also compelling the transport owners to spend additional expenditure for repairing their vehicles.

Sources in the concerned engineering department of Chattogram City Corporation (CCC) said some 170-kilometre road of the city got dilapidated in the wake of huge potholes due to heavy rainfall, tidal water and waterlogging during the rainy season.

The CCC has already started repairing the roads through patchworks and filling the potholes.

But the rainfall is also obstructing the smooth progress of the activities.

New project for massive repair will be launched after the end of the rainfall, said sources.

Transport workers alleged that traffic movement through many roads became difficult due to the situation.

Besides, the Port Connecting Road, which connects the country’s premier seaport with the Dhaka-Chattogram highway, also got damaged further due to the rainfall and waterlogging.

It has been causing additional sufferings to the goods-laden vehicles to and from the port.

Sources in the CCC said there are some 1,174 kilometres (km) of roads including the main thoroughfares, connecting roads, lanes and by-lanes under 41 wards in the CCC area.

Md Jahed Hassan, a private car driver, said the potholes developed on the roads due to the rainfall have been causing great trouble.

The vehicles are very often getting out of order compelling the owner to spend additional money on their repair, said Jahed.

CNG-run auto-rickshaw driver Taju Mian of Zakir Hossain Road said the waterlogging and tidal water obstruct the movement of vehicles in many areas.

The large potholes pose risk of accident at that time, he said.

The passengers have to pay additional fare at that time as rickshaw-pullers and auto-rickshaw drivers are reluctant to commute there, he alleged.

“Primarily, we identified some 170 kilometres of the thoroughfares as badly damaged. An intensive survey will be carried out to assess complete damage of the roads and alleys in the first week of October,” he said.

Then, a project will be come under way to renovate the damaged road for a permanent solution to the crisis, said the chief engineer.

The repair work cannot be carried out smoothly due to rain while work of the ongoing road projects also remain stuck for the same reason, he said.

Asked about delay in completion of the work of Port Connecting Road, the chief engineer said they have been pressuring the contractor to get the work done as early as possible.

“We hope to get the works completed within the deadline set for November 30 this year,” he said.

The engineer also observed that digging of the roads by other government agencies like Chattogram Development Authority (CDA) and Chittagong Water Supply and Sewerage Authority (Cwasa) for different development projects is also contributing to the menace.