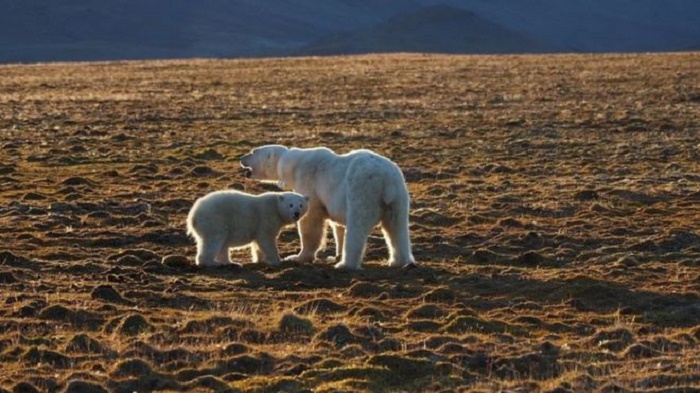 The attack occurred at a campsite near Longyearbyen, the main town of the island in the Svalbard archipelago.

The bear was then shot and found dead at the local airport.

Experts say polar bears' hunting grounds have diminished as the Arctic ice sheet melts because of climate change, forcing them into populated areas as they try to find food.

The man, identified as 38-year-old Dutch citizen Johan Jacobus Kootte, was attacked in his tent before dawn on Friday and died shortly afterwards of his injuries.

Svalbard officials say there were seven people on the site at the time and they are being looked after by health services.

Campsite owner Michelle van Dijk said the man who died had been in his second season as manager; "He had done the right training and knew how everything worked there," she told Dutch public broadcaster NOS.

There had been a warning on Thursday of a polar bear roaming around Longyearbyen, she said. "He said the situation was under control."

What do we know about the polar bear?

Terje Carlsen, a spokesman for the governor of Svalbard, told the BBC that the bear was a three-year-old male whose mother had been airlifted with her cub away from Longyearbyen on Monday.

Their departure was not linked to the attack as polar bears are considered able to fend for themselves once they get to two years old.

Two days later the team from the Norwegian Polar Institute that moved the two bears spotted the three-year-old and ushered it away from Longyearbyen with their helicopter. Jon Aars, who took part in the operation, told the BBC the bear had earlier broken into cabins not far from the city.

After the attack on Friday morning, the three-year-old was shot by one of the people on the campsite at the time. "This is polar bear country, you have to be alert," said Mr Carlsen.

Until now only five fatal attacks on humans by bears had been recorded on the islands in the last 50 years.

The most recent was in 2011, when a 17-year-old British student was killed and four others were injured during an expedition.

The archipelago is home to almost 3,000 people and almost 1,000 bears, according to the Norwegian authorities.

There has been increased human activity in recent years from tourism and scientific research, resulting in more contact with the animals.

Polar bears have been a protected species since 1973, and shooting them is only allowed in self-defence. However, people in Svalbard are advised to carry a weapon outside urban areas.

In 2019, the main settlement, Belushya Guba, reported an invasion of as many as 52 bears, and in 2016 five Russian scientists were besieged for several weeks at a remote weather station on the island of Troynoy.