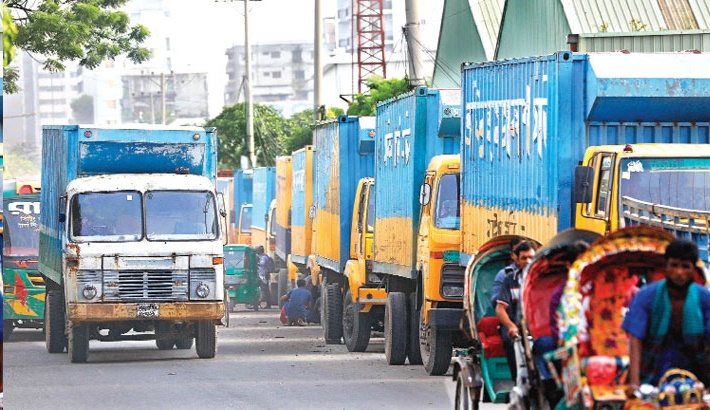 Vehicular movement on many busy roads and thoroughfares in the capital is being seriously hampered as busy points of these roads have turned into ‘terminals’ due to illegal parking.

Unauthorised parking on different city roads has become a common scene and such parking is causing huge traffic congestion much to the sufferings of commuters.

Vehicles heading for different destinations in the city have to pass through these roads, risking accidents. Commuters and pedestrians suffer terribly due to illegal parking.

Besides, the road from Gulistan to Fulbaria, Mirpur Zoo road, Fakirapool, Arambagh and Azimpur roads remain blocked almost all the time due to parking of hundreds of buses.

Alamin, a bus helper of Bahon Paribahan, said, “We usually keep our vehicles at the side of Malibagh-Khilgaon road as our company does not have any parking place.”

Like Malibagh-Khilgaon road, parking on many other busy roads is a regular phenomenon, he added.

Containers, lorries, covered vans and trailer trucks heading for the Inland Container Depot (ICD) at Kamalapur are kept on the road under the very nose of law enforcers.

“Haphazard parking of goods-laden vehicles is creating huge traffic congestion on the busy road from Maniknagar to Khilgaon flyover,” a resident of the area told the daily sun.

Pedestrians have hardly any access to the footpath as many trucks and covered vans remain parked at the roadside. Locals alleged that traffic police turn a blind eye to the illegal parking.

While visiting Maniknagar TT Para intersection to Basabo via Mugda, our correspondent saw the road has remained occupied by containers, covered vans and trailer trucks.

Loading and unloading of goods and repair work on goods-carrying vehicles were also seen in the area.

Manik Mia, a businessman living in Mugda, said many covered vans and trailers of Kamalapur ICD are parked on both sides of the road from Maniknagar to Mugdapara area.

Md Kamruzzaman Khan, president of Bangladesh covered an, truck and trailer workers union, said there is no designated place for keeping covered vans or lorries to carry goods to Kamalapur ICD.

“We are compelled to park covered vans on the road. We do not want to create traffic congestion by keeping our vehicles here as there is no designated place for us,” he added. Kamruzzaman also said around 450 covered vans, trucks and trailers enter Kamalapur ICD every day.

“We appealed to the authorities concerned many times for building a parking place in that area but the authorities are yet to take any initiative in this regard,” he added.

Locals said a bus company keeps around 30 to 40 buses in front of their counters from morning to midnight, which creates traffic congestion on the roads in these areas.

DMP joint commissioner Bashudeb Banik said, “Some covered vans and trucks are kept in and around the ICD. Sometimes, we manage to dislodge them, but after few days, the same picture is seen,” he added.

Alongside passenger buses, many other vehicles, including private cars, are also parked on the busy roads in front of different government offices, schools and colleges, shopping malls and hospitals.

In absence of parking facilities, cars are being haphazardly parked on the streets adjacent to shopping malls, schools, business establishments and government and private offices.

Experts said that lack of monitoring, inadequate parking facilities and poor traffic management are mainly responsible for the illegal parking on the roads in the capital.