Seaweed: The food and fuel of the future? 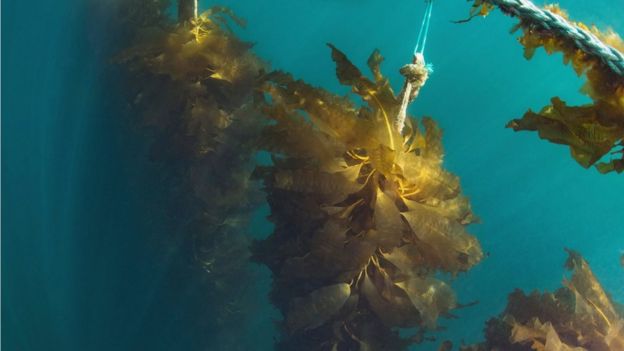 Sunshine has given way to wind and rain, as the motorboat chugs through a fjord in the Faroe Islands.

"Its a bit windy here," says Olavur Gregarsen. "We'll see how far we can get to the harvesting boat."

We soon reach a sheltered spot where steep mountains are looking down on hundreds of buoys bobbing in the sea.

"They are holding up a horizontal line," explains Mr Gregarsen, the managing director of Ocean Rainforest, a seaweed producer. "At every metre another line hangs down, and that's where the seaweed grows."

"The main structure is 10m down. That way we avoid the largest breaking waves," he says.

Despite the Danish territory's remote North Atlantic location, Mr Gregarsen says the deep, nutrient-rich, waters are well suited for growing seaweed, with a stable temperature of between 6C and 11C.His firm is among a wave of seaweed farms that have sprung up in Europe and North America, spurred by a growing demand from the food industry and others.

"You have a biomass that can be used for food and feed, and replacing fossil-based products like packaging material from plastic," he says.

Mechanisation
Seaweeds are fast-growing algae. They utilise energy from sunlight, and take up nutrients and carbon dioxide from the seawater. Scientists suggest seaweed could help fight climate change and offset carbon emissions.

Ocean Rainforest recently won funding from the US Department of Energy to build a similar system in California, where there's interest in developing industrialised seaweed production for future biofuels.

Aboard the harvesting boat the skipper controls a mechanical arm that lifts lines from the water. The seaweed is chopped free, filling up containers. It's quick but messy work. The lines are then left to regrow. This year around 200 tonnes will be harvested.
But the company is scaling up, and plans to double its capacity this year. It isn't making money just yet, but expects to soon, Mr Gregarsen tells me.

"We can see how we can mechanise this, how we can make this a really large-scale efficient activity," he says.

"There are not many companies that do this as a profitable business, if any."

Cosmetics and medicines
Seaweed needs to be processed quickly. At a small plant in the Faroese village of Kaldbak, machines clean the harvest. Some is dried and supplied to food manufacturers. The rest is fermented and shipped to animal feed producers.

Most farmed seaweed is consumed in food, but extracts are used in a wide variety of products. Whether it is toothpaste, cosmetics, medicines or pet food, these often contain hydrocolloids derived from seaweed, which have gelling or thickening properties.

And more products are coming, with other firms working on textiles and plastic alternatives, including biodegradable packaging, water capsules, and drinking straws.