Walmart joins Microsoft in bid for TikTok's US operations 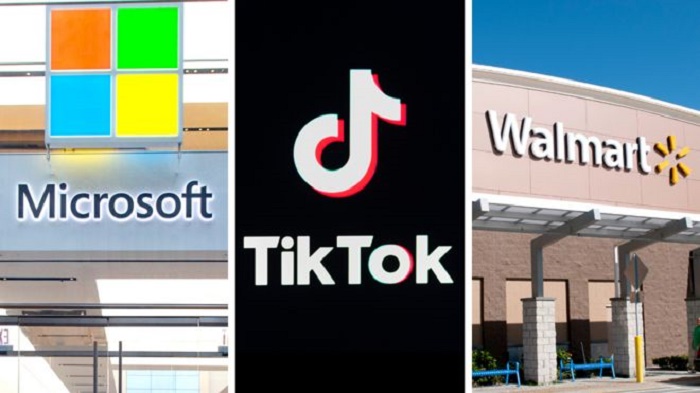 The US retail giant Walmart has said it will team up with Microsoft to make a bid for the US operations of TikTok.

Walmart told the BBC it thought a deal with the Chinese video-sharing app would help it expand its operations.

TikTok has been given 90 days to sell its US arm to an American firm or face a ban in the country. Donald Trump has alleged it shares its user data with Beijing - claims it denies.

Earlier on Thursday the firm's boss resigned ahead of the impending ban.

Confirming that the company was pursuing a deal, a Walmart spokesperson told the BBC: "We are confident that a Walmart and Microsoft partnership would meet both the expectations of US TikTok users while satisfying the concerns of US government regulators."

Microsoft, which confirmed at the beginning of August that it was in talks with TikTok, told the BBC it had "nothing to share at this time".

With Walmart, which owns UK supermarket chain Asda, it will now go up against other prospective bidders, including the US tech giant Oracle.

According to reports, TikTok's US operations could fetch as much as $30bn (£22bn) if a deal is reached.

Since its global launch at the end of 2018 Tiktok has attracted a huge following, especially amongst the under-25s.

The app lets its followers create short videos, with the help of an extensive database of songs and wide range of filters.

However, the Trump administration has accused its owner, the Chinese internet firm Bytedance, of being a threat to US national security.

It says the data the company collects from its 800 million users - 100 million of whom are reported to be in the US - is at risk of exploitation by the Chinese government.

Beijing has denied such claims, calling the US ban politically motivated.

The founder of ByteDance, Zhang Yiming, has faced criticism for his decision to sell to a US company. But in a letter to his Chinese staff he said it was the only way to prevent the app from being taken down in America.

It's not the only Chinese-owned app to attract the suspicion of the US authorities - the messaging app WeChat also faces a ban.